Comments on If Evolution is True, How Many People Should Be on Earth?

For some unknown reason, I’m unable to comment on the ‘Office Hours’ thread, so I don’t seem to have much choice but to create a new thread in order to comment.

Some of the points that I would have made have already been covered (e.g. carrying capacity).

However I think it is worth pointing out that the growth parameter, c, is ludicrously high at a value of 1.2. This means that the population would double every 3.8 generations, or every 144 years (for a generation of 38 years).

A decent survey of long-run historical estimates of World population can be found in this Wikipedia article: 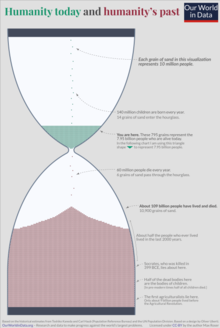 This article lists current estimates of the world population in history. In summary, estimates for the progression of world population since the Late Middle Ages are in the following ranges: Estimates for pre-modern times are necessarily fraught with great uncertainties, and few of the published estimates have confidence intervals; in the absence of a straightforward means to assess the error of such estimates, a rough idea of expert consensus can be gained by comparing the values given in indep...

This shows that the World’s population rarely doubled even over a millenium.

And even these growth rates have been for an agricultural society. I would suspect that growth rates for the pre-agricultural hunter-gatherer societies that existed before these estimates (which only go back to 10,000 BC) would be even lower. And then you’d have to factor in the long term effect of an Ice Age on population.

What would be the most clear and direct way to show the mistake?

Toss some actual real-world numbers into his model and see the results:

E.g. take the estimated current world population of 7.9 billion as of November 2021. That means 53 generations since 1AD, according to the model, so the population should be deflated by 1/(1.253) or 1/15726, resulting in a world population at 1 AD of about half a million.

However census data of the early Roman Empire alone, from 8 BC, show it to have had a population of 4.2 Million[1] – as the source notes however, this may be a considerable under-count due to censuses on occasion failing to count females, citizens’ families, freedmen and/or slaves, with the Empire under Augustus being estimated to have a population of about 45 million.