The Campaign to Overturn Ireland’s Blasphemy Law on Oct. 26 Has Begun 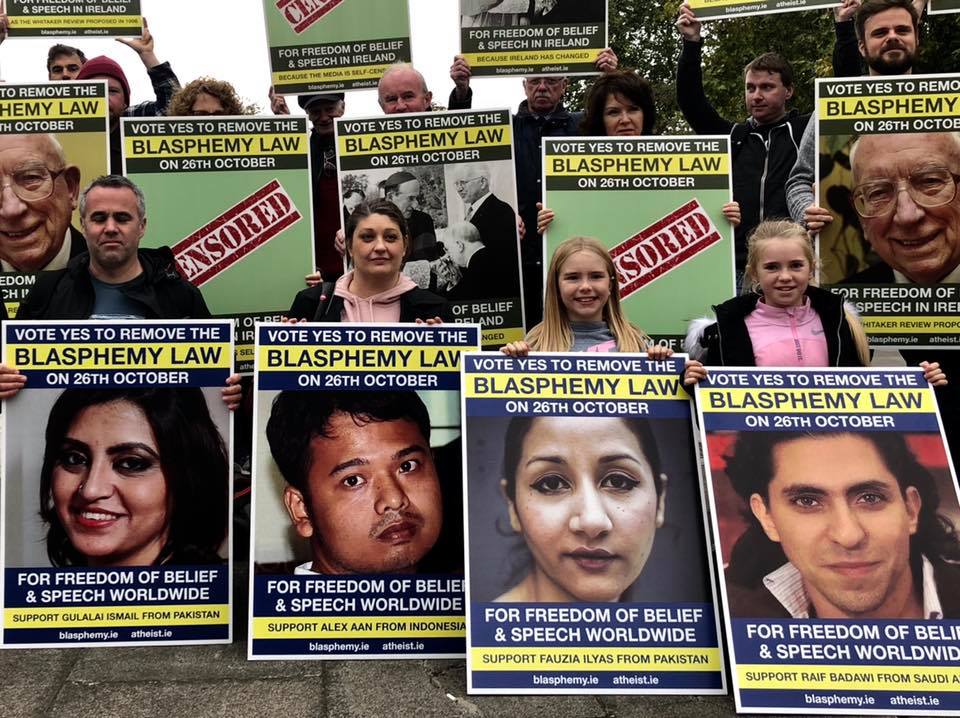 The Campaign to Overturn Ireland’s Blasphemy Law on Oct. 26 Has Begun

Blasphemy is a victimless crime.

Fascinating post, @Patrick. I think I may have missed it when you first provided the link one year ago. The article prompted my thoughts about blasphemy laws in general.

I agree with the atheists’ list of reasons for overturning the Irish blasphemy law and can think of various additional reasons—in no particular order of priority:

(1) Not all “transgressions” which some people group may dislike for religious reasons need be law of the land. For example, greed, covetousness, excessive pride, and misdirected lust are all prohibited in my born-again evangelical faith but I don’t think any good purpose would be served by adding these “crimes” to my local county prosecutors workload. I’d say the same of blasphemy.

(2) What constitutes blasphemy? Who decides? Do we need government-paid commissions of theologians and religious studies scholars who work with prosecutors and the courts to evaluate who has and hasn’t blasphemed?

(3) Also, which deities and religious writings qualify for Blasphemy Commission considerations? If I lived in Ireland and somehow compromised the dignity of Vishnu or Thor in a public statement, should I be prosecuted? How large of a commission must be funded by taxpayers so as to make sure that every possible deity-follower and religious worldview is given equal protection under the law? To make matters even more difficult, what if I accuse Xenu from Scientology lore of genocide because he brought billions of beings to earth, placed them around volcanoes, and killed them with hydrogen bombs? [Just to be clear, L. Ron Hubbard claimed all of this actually happened many millions of years ago.] Does Xenu qualify as a deity whose honor is protected by a blasphemy law? Or should that matter, seeing how there are many non-theistic religions (e.g., some East Asian religions) which surely deserve “equal protection” for the dignity of their most sacred ideas. Does every religious idea (not just deities per se) deserve a taxpayer-funded defense from insult?

(4) Do the courts in Ireland have a lot of idle judges and prosecutors who need more cases to keep them busy? Is a blasphemy law a good way to keep them occupied?

Yes, I realize that nobody is actually getting prosecuted for blasphemy in Ireland and that hasn’t happened for something like a century and a half. But I think the atheist organizations and others who want to entirely obliterate blasphemy laws around the world have a lot of excellent reasons for doing so.

By the way, I also can’t help but think of “flag desecration” laws in the history of America. What one person considers honoring the flag (e.g., depicting it on a sweatshirt), another might consider dishonoring. Should a piece of cloth be given special “rights”? When I was very young, many adults told me that it was illegal to allow a flag to touch the ground in any way or to throw it in the trash if it got shredded in a bad storm. (There were elaborate rules for the disposal of a flag. We even learned them in elementary school!) I don’t think such laws actually existed on the books but people did get prosecuted sometimes under “disturbing the peace” or “disorderly conduct” charges. Do flag desecration laws and prosecutions serve a good purpose? Or do they protect favored people from hurt feelings? Or both?

I tend to lean towards freedom of expression—and also common courtesy in respecting the views of others. We don’t necessarily need force of law to give due regard to the latter. All of our freedoms in free societies involve tensions and balance between various civil rights and freedoms.

I can hope that atheists and theists can work together in ending onerous blasphemy laws wherever they exist.

Yes I agree with you.
Take a look at this humorous Jesus and Mo:

Ganesha, the elephant-headed Hindu god of luck and the offspring of Shiva and Parvati, is my favorite deity. Pot-bellied and full of fun, he’s also the god of wisdom and patron of arts and sc…

Blasphemy appears to be a big no-no in Italian Football:

Two Italian soccer players have been given one-match bans for blasphemy after being filmed taking God’s name in vain while out on the field of play.
Sassuolo’s Francesco Magnanelli and Parma’s Matteo Scozzarella were handed their punishment Tuesday after league officials examined television pictures of the incidents that took place last weekend. Italian soccer stars banned for blasphemy

(Hat-tip, The Friendly Atheist – but given that that blog appears to be treated with disproportionate skepticism here, I decided to cite the CNN article, that they kindly cited as their source, instead.)

I can easily see a player saying something like “God damn it” or similar, having missed a shot a goal. This should be a private moment of frustration to them, but it appears that officials are now lip-reading the TV replay to sniff out the most inconsequential infraction. This is in marked contrast to their lenient treatment of racist harassment by fans, according to the article.