How Does Intelligent Design Differ from Creationism?

Now that the noise level has dropped a little bit, this may be a propitious moment to point out why ID is best viewed as a metaphysical school rather than a scientific one, in my opinion.

You’re wasting your time here with that. Most of the members (the reasonable ones, anyway) already acknowledge that ID Creationism is not a scientific movement. It is the ID Creationists who keep up the ruse that they are doing science. So go off and try to explain this to them. If you can find a venue where they actually allow comments and won’t ban you for trying to talk sense. Good luck.

Agreed. Nobody should have any doubts about that!

Never mind doubts. @Eddie’s claim is factually wrong. ID is completely driven by religious presuppositions, and is not supported by a single scrap of “evidence provided by nature.”

The error here is in denying the fundamental deceitfulness of the ID Creationist movement, which is extensively documented in their own words: 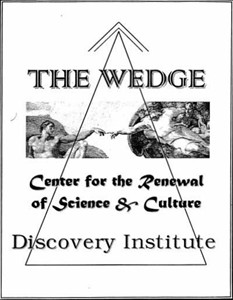 Not the claim of @Eddie’s that i was affirming.

Never mind doubts. @Eddie’s claim is factually wrong. ID is completely driven by religious presuppositions, and is not supported by a single scrap of “evidence provided by nature.”

This is a pretty hard claim to support. Sure it is partially driven by ideology as evolutionary theory is but there is some scientific work going on.

Not the claim of @Eddie’s that i was affirming.

If you’re affirming the claim, what is “ID theory,” exactly?

This is a pretty hard claim to support. Sure it is partially driven by ideology as evolutionary theory is but there is some scientific work going on.

Evolutionary theory is driven 100% by science. Stop making up crap.

And there is no good scientific work going on in ID Creationism. There is just bad religious propaganda made to look like science. This is obvious to any informed and unbiased person. Of course, you are neither, hence your opinion.

I think it’s more accurate to say that ID theory has not yielded any scientifically valid research to date. Occasionally, ID proponents have published peer-reviewed research by following the standard scientific paradigm and practices, but those articles (e.g., Axe1997 and Behe 2010) have not succeeded in supplying a scientific foundation for ID.

@Agauger feels that she is on the cusp of a major scientific leap forward for ID. Given the previous publications that have emerged from the ID community, caution is of course the appropriate stance.

I have already enumerated above a three-part standard that an “ID” paper would need to fulfill to say that ID is scientifically tenable. Is that a good standard? What do you all think?

If you’re affirming the claim, what is “ID theory,” exactly?

In my opinion, ID (all caps) is a political advocacy program based on the optimistic (and unprovable) position that science can detect/demonstrate design!

Seems good to me. Of course design is implicit and a given for Christians, and it would not at all break my heart if it could be demonstrated. I’m still thinking that it is or analogous to a fine-tuning argument until demonstrated otherwise.

Other design proponents have been critical of at least some aspects of evolutionary theory, but none have to my knowledge advanced any scientific framework that would show:

One that seems consistent is that nature in all its wonder is/will continue to be fascinating to study, like a fantastic Rube Goldberg machine.

(And why should we even be able to study it?)

I think it’s more accurate to say that ID theory has not yielded any scientifically valid research to date.

No, it would not be “more accurate.” That would presume that the ID creationists are even trying to do that. They don’t even have the barest scraps of an outline of how they would go about this. After 20 years of declaring that they have already succeeded.

Anyone who even takes them seriously and treats them respectfully is helping them in their anti-scientific mission.

Not omniscient. Just able to see what is obvious.

I’d settle for highly probable predictions. Scientific predictions are generally not ineluctable, since one has to test both the primary hypothesis and a bundle of auxiliary hypotheses at the same time.

Im rather surprised at the scientists who seem unperturbed when i ask them how they plan to test for God’s presence or absence in a particular step if Evolution?

And if there is lab simulations, how do they plan to test whether God is going to be present or not in these lab tests?

Evolutionary theory is driven 100% by science. Stop making up crap.

Then why do the some of the text books push Neo-Darwinism.

If you and @Eddie PM me your email addresses, I can send you a PDF copy.

It all depends where you demarcate science. If it is inference to the best explanation as Darwin argued is the standard then ID is fair game. If you demarcate at a hypothesis that needs verification to a high statistical confidence level then Behe’s limit to evolution is probably accurate.

Then why do the some of the text books push Neo-Darwinism.

Because it’s the 100% scientific best explanation we have for the history and diversity of life on the planet. Why does ID-Creationism push religiously motivated anti-science nonsense?