The Extra Face in Mount Rushmore

Humans have the ability to see faces everywhere.
How about this - oldest woman figure?

One of my favorites is a portrait of Lenin that appeared on a shower curtain: 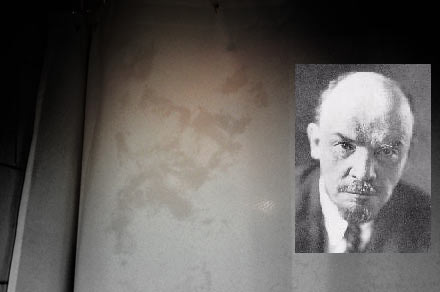 Ha! Never seen that one before

Is that Marilyn Monroe?

Rumor is it’s supposed to be the Virgin Mary. On a grilled cheese sandwich. A casino in Vegas actually paid $28K for it (!) and has it on display.

Maybe I’m not in the right line of work.

I am Open to Design Arguments of a Sort

The issue may be in detection and how humans can perceive intent and purpose in one object versus another. The closer something is to a human design
the easier it is for us to detect design.

Perhaps, but I am not so sure…

If that fifth face is a real thing, then it seems to me it would be an easy problem to solve. You go up close and you look for signs of how it was made:

Yet ID advocates (not necessarily you Dr.) seem to have no interest in investigating the how it was made aspect of their claimed designed life. Strange.

@Agauger, this seems like a valid complaint. It seems that we could only determine if the face was designed if it showed tell tale artifacts of human design. Without seeing these tell tale signs, a human could have still done it (perhaps by choosing the right mountain and placing the other heads just so), but we would never know from evidence (unless of course we found diary that told us so).

Here is the problem though. There are no tell tale artifacts of human design in biological systems. So how do we determine if it designed? Honestly, the complexity we see in biology looks far more like Everest or Rushmore’s Fifth Face, than the presidential busts.

Finally, it does seems we have to know something about how design happens in order to detect it. Failing some model of design, we can’t really tell.

Perhaps, but that isn’t what it shows me. Why not summarize the main argument?

@Patrick
Just to be clear, this particular artifact is disputed. And I wasn’t talking about faces. And I didn’t say it would always be decisive one way or another. You just go and look.

@T.j_Runyon
Thanks for your good sense. I suspect @Timothy also knows there is no way his “project” would work. The designer, as you point out , is unlikely to have manufactured new phyla in a factory and then left it on the bottom of the sea floor for us to find. @Timothy just likes to poke us.

Just to be clear, this particular artifact is disputed.

I know. That’s why I chose it. I wanted to hear what you thought about. It looks like a rock to me.

@swamidass
I think we are finally in a position to begin to answer some of these questions. We are accumulating enough depth of genomic and phylogenetic data to begin to get a read on the diversity and relatedness that is out there. Rather than look at individual molecules or pathways we need to look at the patterns.

Out of nowhere the mind comes forth.
—the Diamond Sutra

The designer, as you point out , is unlikely to have manufactured new phyla in a factory and then left it on the bottom of the sea floor for us to find.

You determined that is unlikely exactly…how? You seem quite fond of telling us what the Designer would and wouldn’t do yet you can’t say from where you get this “insider” confidential information. BTW isn’t your sea floor scenario above exactly what Stephen Meyer has been pitching the last few years with the “designed” Cambrian fauna?

@Timothy just likes to poke us.

Not poking, just asking critical questions to test your ID position. The same sort of questions you’d get if you submitted your claims for publication in a peer-reviewed science journal. So far the inability for ID to answer is rather telling.

Okay; I’ll bite into your analogy.

Without seeing these tell tale signs, a human could have still done it (perhaps by choosing the right mountain and placing the other heads just so), but we would never know from evidence (unless of course we found diary that told us so).

Analogously, mind you --don’t we have just such a “diary entry” in Genesis 1, and another reference to the same in John, chapter one? : )

@Timothy there are ways of asking questions that don’t involve pokes. Study T aquaticus for examples. How do I know the designer didn’t use factories on the seafloor? Because factories don’t work very well with molecules. And everything we see around us is made of molecules. The kind of factory I had in mind was working with metal and wire and plastic and other formed objects like that. Now if you come at me and say that chemical engineers use factories to manufacture molecules I will respond by saying they don’t make the kinds of molecules that are necessary to make cells. Not in the kinds of quantities and complexities that are required. Then if you say the intelligent designer could of course do that. I will say oh. Show me.

Not in the kinds of quantities and complexities that are required.

Then why should we believe in intelligent design? I mean our best minds can’t do these things. So why should this intelligence be able to? If this leads to positing a super intelligence, then why couldn’t he/she/it use a factory like a chemical engineer to manufacture the necessary molecules?

Then if you say the intelligent designer could of course do that. I will say oh. Show me.

Well, then wouldn’t you have to show the intelligence you are positing can create and design objects out of thin air without prexisting materials?

How do I know the designer didn’t use factories on the seafloor? Because factories don’t work very well with molecules.

How do you know what sort of factories or production machinery the Designed used? Or what their capabilities are? Once again you are telling us what the Designer could and could not do based on your own intuition. That’s what I keep pointing out to you. You are building your Designer case on a foundation of unsupported assertions.

Then if you say the intelligent designer could of course do that. I will say oh. Show me.

Sorry, you have it backwards. You’re the one claiming the Designer manufactured life, the onus is on you to show us how.

@T.j_Runyon
What you argue doesn’t make sense to me. Why should I expect the intelligent designer to use a factory? Why should whether or not I believe that he uses factories count against intelligent design? I don’t know how he did it. Does that count against intelligent design that I don’t know? For goodness sake, no one knows how it happened. I suppose you could call hydrothermal vents chemical factories. And then say that the intelligent designer guided the process to produce what was needed. I could imagine all kinds of scenarios. But to demand that something be left behind as proof is kind of a joke. And that was my response to Timothy and the reason why I made the comment about factories being ludicrous and questions being pokes.

But to demand that something be left behind as proof is kind of a joke.

How do you know the Designer’s manufacturing process left no marks or signs in the finished product? Once again you’re just offering your own unsupported assertions. I guess I’ll have to keep pointing it out to you every time you do it.

I’m sorry you view critical analysis questions of your claims as “pokes”. How did you ever get any papers through peer review?

But to demand that something be left behind as proof is kind of a joke.

You misunderstand. No one is demanding that. I think the issue is the ID community doesn’t seem interested in finding out if anything was left behind and that doesn’t come off as very scientific. I know there aren’t any “factories” on the sea floor. I understand the clear metaphysical implications of ID being true. But this conclusion is reached using means outside the natural sciences. But ID wants to stay within the sciences. So it seems like investigating something like materials that may have been left behind is something a truly scientific enterprise would want to do.