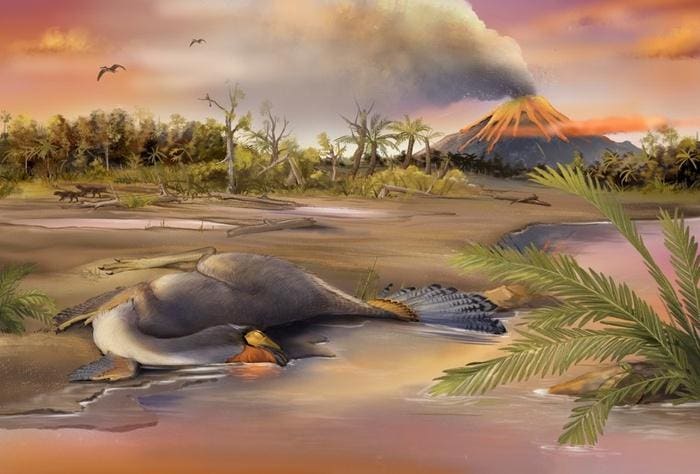 The discovery of exquisitely preserved cells in a dinosaur fossil shows that - in theory - DNA molecules may survive far longer in the fossil record than previously thought.

Furthermore, the team isolated some cells and stained them with a chemical used in biological laboratories worldwide. This purple chemical, called hematoxylin, is known to bind to the nuclei of cells. After staining the dinosaur material, one dinosaur cell showed a purple nucleus with some darker purple threads. This means the 125-million-year-old dinosaur cell has a nucleus so well-preserved that it retains some original biomolecules and threads of chromatin

It’s vanishingly unlikely that this will ever result in any actual sequence. Hematoxylin binds to DNA, but I suspect it also binds to other things, possibly some products of DNA breakdown.

So no Jurassic Park?

There is video evidence!

The most important thing that you need to realise when discussing soft tissue in dinosaur fossils is that “soft tissue” can refer to a wide variety of different things.

At one end of the scale (the “young” end), “soft tissue” can refer to very well preserved whole carcasses with their internal organs still intact, fully sequenceable DNA in every cell, and the remains of their last meal in their stomachs. Such carcasses are rarely more than a few tens of thousands of years old. No prehistoric dinosaur carcass has ever been found in anything even remotely approaching this condition.

At the other end of the scale (the “old” end), you have fossils that once were soft tissue but have long since been fully replaced by minerals. It is rare for soft tissue to fossilise in this way, but when it does, it can persist indefinitely.

Just next to that end of the scale, you have fossils that are only partially mineralised with structures resembling soft tissue, and breakdown products from the original organic molecules, still in place. Organic molecules can persist pretty much indefinitely, though they will break down to form other, simpler organic molecules eventually. That is how oil forms, after all. Some of these breakdown products can still contain enough chemical information to indicate that they once were DNA. But that’s a very, very different thing from finding actual sequenceable DNA itself.

Unfortunately, this very broad use of the words “soft tissue” causes a lot of confusion and misunderstanding among non-scientists about what exactly is being reported. Then when you add into the mix journalists writing for the popular press, whose golden rule is “never let the truth get in the way of a good story,” science fiction writers wanting to make Jurassic Park and the like sound plausible, and young Earth apologists, who approach science purely as some kind of “ammunition gathering exercise,” you’ve got a subject that is a breeding ground for misunderstanding and misinformation.