Biocomplexity 2021.1 - Comments from the peanuts gallery

Biocomplexity have published their first paper early this year.

It’s an engineering perspective on the bacterial flagellum, which shows that the DI are still obsessed with their favorite example, and suggests there will be lots of unwarranted assumptions and unsupportable claims.

Still, one should give the paper a chance, in case it scores a lot higher than usual on the standard scale.

Not really. Typical systems engineering techniques are means of designing and manufacturing systems. Systems biology techniques are more concerned with *reverse-*engineering, i.e. finding out how something that already exists works, not about how to build something that doesn’t yet exist. There are a few examples of biological systems being designed that lie within systems biology, but that’s a small subset of the field, and characteristics of that subset are not necessarily characteristics of systems biology as a whole.

However, this isn’t quite enough to give the article a score of zero.

Similarly, reverse engineering the features of biological organisms leverages both biology and engineering disciplines. Specifically, the systems engineering perspective on bacterial motility detailed in Parts 1, 2 and 3 studies the purpose, functions, components, and structure of a typical bacterial flagellum and the flagellum’s assembly stages. …

The “purpose”? Even if one accepts the dubious idea that bacteria have flagella for a purpose, it’s hard to study that purpose without saying whose purpose it is. Expect the usual ID dancing and weaving around the identity of the designer.

The dynamic operation and control of this motility organelle is also studied. This study takes two essentially independent approaches below. One is a constructive approach, which this Part 1 covers; the other is an analytical approach to be covered in Part 2.
The first, constructive approach is a top-down specification. It starts with specifying the purpose of a bacterial motility organelle, …

It’s one thing to try to discuss the ‘purpose’ of flagella. It’s quite another to specify that purpose. Does the author think he is actually writing the requirement for bacteria, or is this just overambitious phrasing?

the environment of a bacterium, its existing resources, its existing constitution, and its physical limits, all within the relevant aspects of physics and molecular chemistry.

Specifying “the physical limits” of a bacterium or a bacterial motility system is a bit tricky without knowing all possible mobility systems, made even more tricky by their potential to evolve into something very very different.

From that, the constructive approach derives the logically necessary functional requirements, the constraints, the assembly needs, and the hierarchical relationships within the functionality. The functionality must include a control subsystem, which needs to properly direct the operation of a propulsion subsystem.

False. A mobility system that operates at random is possible. But this is perhaps too nit-picky to be counted as the scale-mark point.

Those functional requirements and constraints then suggest a few— and only a few—viable implementation schemata for a bacterial propulsion system.

Given the huge variety of propulsion systems that exist within biology and engineering, I’d say the author is here expressing only his lack of knowledge and imagination.

The entailed details of one configuration schema are then set forth.
This constructive approach is analogous to how a myriad of theorems, definitions, and constructions of plane geometry are derived from the few basic axioms and the rules of logic.

Oops. The author is taking a top-down approach. Deriving theorems and constructions from axioms is a bottom-up approach. These are not analogous. (Nor are definitions derived from axioms).

Still, the author managed more than two paragraphs without a clear falsehood or fallacy. That’s not bad compared to the competition.

A few comments on the rest of the paper:

This may or may not be true, depending on the particular requirements. It certainly isn’t true as a generality.

The purpose requires that the propulsion subsystem must
provide at least two states in response to those control subsystem signals: forward motion and stopping/reverse. Simply
stopping all motion accomplishes little …

Often a system’s specification contains a list of optional features.

Second, the propulsion speed needs to be sufficiently fast,
especially for the purpose of escaping threats. It seems that one
body diameter (about 1 to 10 µm) per second (to an approximate order of magnitude) would be a requisite minimum velocity in its fluid environment. A substantially faster speed
would be wasteful of energy and perhaps dictate a more complex design.

Typical bacteria propulsion speeds seem to be about 200µm per second, or about 50 body lengths per second. Either the author’s requirements or the actual bacteria are two orders of magnitude out.

This specification includes some estimated reasonable response and speed values, but a biologist familiar with bacteria might suggest better values.

As might a Google search, which the author clearly didn’t do.

The energy cost to operate the propulsion subsystem must
be less than the energy obtained by navigating to and consuming nutrients. Otherwise, the bacterium would soon
die of starvation.

There are other major failings of the paper, including a diagram of “The three subsystems of a bacterial motile system” that doesn’t clearly delineate three subsystems, but perhaps the biggest flaw is that despite the abstract’s claim that “It sets forth the logically necessary functional requirements, constraints, assembly, and relationships”, nowhere in the paper is there anything remotely resembling a list of requirements. The requirements that are included are things like

neither of which are anywhere near being specific enough to qualify as requirements. Instead, the author dives straight into solutioneering (“This suggests a constraint that a “leg-like” means
requiring motility for a bacterium would not be efficacious, …”), which is a very common mistake when writing requirements.

I guess someone should have put a stake thru its heart.

The blogger known as the Sensuous Curmudgeon reported yesterday that the Biologic Institute, supposedly the research arm of the Discovery Institute, is closing: Appears the Biologic Institute [An enterprise of the Discovery Institute] is history, green screen and all. On their 2019 990, Director Axe will no longer draw a salary, but will be a prof at Biola “Univ.” Office space is for rent. Location is listed as “permanently closed.” Their final 990 showed a loss of $133,000. [Emendation in original.] The end of an era it seems. Doug Axe is currently chair of Biology at Biola (no relation to BioLogos or Biologics) University.

Ah, Bio-Complexity. No journal was ever more ripe for an Alan Sokal-type hoax. I wonder if anyone’s tried. I’d write a legal piece for them but while I suspect they don’t have the in-house talent to distinguish a hoax from the real thing, I’d probably have to have coffee with one of them at some point and that would be too high a price to pay.

Ah, Bio-Complexity. No journal was ever more ripe for an Alan Sokal-type hoax.

I think it’s vulnerability to such a hoax may have been limited by how far outside their inner circle they were willing to accept papers from. My general impression was that the majority of papers were accepted from people who they already knew, and whose enthusiastic advocacy of ID they could be assured of.

It’s a shame Douglas Adams is no longer here to write about the purpose of the puddle is to fill that hole, and engineering analysis shows the puddle was specifically designed to do so quite precisely.

ETA: Just took a quick scan of the paper. The paper concludes with that Creationist favorite “what good is half an eye” argument.

“Can any partial implementation of a motility system be even slightly advantageous to a bacterium? Examples of a partial system might lack sensors, lack decision logic, lack control messages, lack a rotor or stator, lack sealed bearings, lack a rod, lack a propeller, or lack redirection means. Would such partial systems be preserved long enough for additional cooperating components to evolve?”

Second, the propulsion speed needs to be sufficiently fast,
especially for the purpose of escaping threats.

I wasn’t sure, but while trying to find out I came across something much more interesting:

Using high-speed microscopy, we monitored the swimming behavior of the monopolarly flagellated species Shewanella putrefaciens with fluorescently labeled flagellar filaments at an agarose–glass interface. We show that, when a cell gets stuck, the polar flagellar filament executes a polymorphic change into a spiral-like form that wraps around the cell body in a spiral-like fashion and enables the cell to escape by a screw-like backward motion.

That has major consequences for the requirement for reverse motion…

The chemotaxis may be positive or negative. Direct movement toward a chemical attractant or direct movement away from a chemical repellant. I am unaware of any bacteria fleeing predators, though. Their statement stretches reality quite a bit.

I am unaware of any bacteria fleeing predators, though.

Would this be your first example? 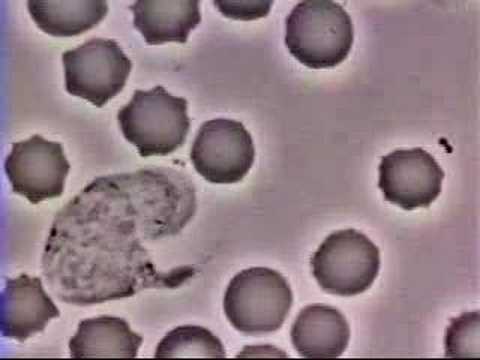 Hmmmm… I’d like to know the speed of the recording. I suspect that is a time-lapse. But possibly so.