Faith Across the Multiverse by @AndyWalsh, 2018 by Hendrickson Publishers, Peabody, Massachusetts. Used by permission. All rights reserved. 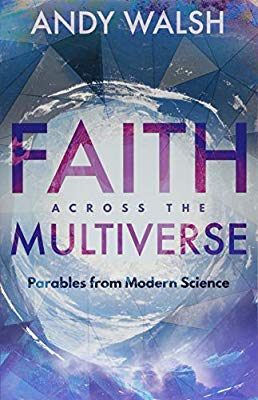 Faith Across the Multiverse: Parables from Modern Science

It’s been roughly a century since the most recent of all these experiments was first conducted, and in all that time the most widely accepted explanation is that the nature of light encompasses both wave properties and particle properties. We can’t deny the interference patterns that light creates with itself, and we can’t get around the discrete or quantum behavior of light. Instead, the best way to resolve what appears to be a contradiction is to instead embrace it, and realize that our metaphors of tiny balls and water waves were both inadequate or incomplete when it comes to describing light.

On the particle side, we have realized that there are other ways to get discrete behavior. Discrete entities on the subatomic level have a reality, just a different one than discrete entities on our human scale experience. On the wave side, we have found a model that can allow a wave to exist without a medium after all. It turns out that certain properties of light, and indeed of all subatomic entities, have a probability distribution, which is defined by a wave; these waves interfere with each other and change the probability of where a photon will show up in our slit experiment, for example. Ultimately, we’ve found a feature of reality that requires us to invent a new concept and create (or really coopt) a name for it.

Superhero fiction takes a similar approach to resolving its questions of dual identity. Rather than relieving the tension among the facets of their lives, many heroes redefine their roles around an integrated concept of themselves. Some come to that place early on. The Fantastic Four lived publicly as superhero celebrities basically from their origin story onwards; when the world doesn’t need saving, they are using their powers, their minds, and their resources to make material improvements in the world as innovators and entrepreneurs. Jessica Drew, a hero known as Spider-Woman, tried giving up superheroing to have a baby, only to realize her child provided extra motivation to save the world. It helps these heroes found careers that complement their costumed exploits, or perhaps chose them as part of creating a

coherent self. Similarly, Barry Allen upholds law and order as the Flash and as a forensic scientist for the police department and Carol Danvers bridges existing military command structures and superhero teams as an Air Force colonel and Captain Marvel.

Two of my favorite superhero stories take an even deeper look at the process of self-integration with rich, multi-faceted characters. David Haller is the son of X-Men founder Professor X, and he came into his own in the pages of X-Men Legacy by Simon Spurrier, Tan

Eng Huat, Craig Yeung, et al. David is written as having dissociative identity disorder; each identity has its own superpower. As the story begins, David has them imprisoned in his mind and hauls them out of their cells when he needs to exploit a given ability. Over the course

of a world-saving adventure, he realizes the value of employing grace to allow the various parts of himself to integrate organically. Whether that is a viable model for dealing with a genuine mental health concern, I cannot say, but I found it a moving portrait of how to deal constructively

with the multitudes we all contain.

The other character is Multiple Man Jamie Madrox, the private investigator with the surplus of perspectives whom we already met in chapter 3. To get through the cases and crises, he has to learn to accept that he is somehow the sum of all of his disparate parts. Both David

Kamala Khan is on a similar journey. As I’m writing this, she is still very much in the midst of it. Already there is evidence of progress and success. For example, she has discovered that her relationship with her parents is flexible enough to accommodate her powers and her desire to use them responsibly, rather than requiring her to be limited in ways that would prevent her from thriving. In that sense, it was her own understanding of the category of her parents’ daughter that was inadequate, rather than the category itself.

Still, these are all stories, and fiction isn’t always constrained by the same rules as reality. Integration and unification of identity are clearly the goal for understanding the nature of Jesus, but are those goals plausible? Just as we looked at various experiments that revealed properties of light, we’ll need to look at the data we have for Jesus from the Bible.

The first thing that I notice is that the observations we have of Jesus are equally as challenging to reconcile. I find the story of the resurrection of Lazarus to be particularly illustrative here. Lazarus and his sisters Martha and Mary are described as close friends of Jesus. At one point, Lazarus falls ill, so his sisters send for Jesus, who had healed a number of other people throughout his ministry. The messengers reach him and appeal to his humanity, imploring him to have compassion on his friend. The response they get is unexpected; Jesus agrees to come, after taking care of some other unspecified business. He indicates that there is a plan in place that will maximize God’s glory. When he finally arrives, Lazarus has already died; the narrative leaves little doubt that if Jesus had come right away, he would have found Lazarus alive.

Understandably, the emotions in that situation are intense. And yet, through their inner turmoil Lazarus’ sisters recognize that Jesus might still have the power to to help their brother. They seem to be appealing to his divine nature, to exercise authority over life and death

in a way that no human being would be capable of. And the immediate response they get is the shortest, and one of the most famous, verses in the Bible: “Jesus wept” (John 11:35). This is a very human, emotional reaction to the situation, when what was sought was a display of power. The Gospel of John does record that Jesus ultimately brings Lazarus back from the dead, apparently confirming his divine nature, but not without complicating our ability to understand what that means.

Or does it? Maybe what Jesus is really showing us is that our understanding of humanity and divinity is flawed. That fits with our ultimate premise, that Jesus represents God’s ultimate effort to model for us concepts that we would otherwise have been unlikely to arrive at, in order to facilitate communication between us and God. So let’s see what else Jesus teaches us and how that relates to what it means to be man and God.