Emergence of life in an inflationary universe 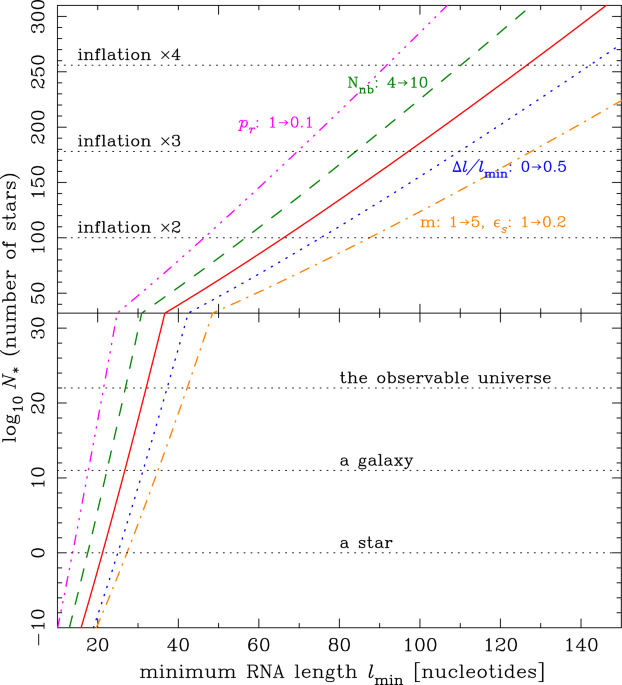 Emergence of life in an inflationary universe - Scientific Reports

Abiotic emergence of ordered information stored in the form of RNA is an important unresolved problem concerning the origin of life. A polymer longer than 40–100 nucleotides is necessary to expect a self-replicating activity, but the formation of such a long polymer having a correct nucleotide sequence by random reactions seems statistically unlikely. However, our universe, created by a single inflation event, likely includes more than 10^100 Sun-like stars. If life can emerge at least once in such a large volume, it is not in contradiction with our observations of life on Earth, even if the expected number of abiogenesis events is negligibly small within the observable universe that contains only 10^22 stars. Here, a quantitative relation is derived between the minimum RNA length l min required to be the first biological polymer, and the universe size necessary to expect the formation of such a long and active RNA by randomly adding monomers. It is then shown that an active RNA can indeed be produced somewhere in an inflationary universe, giving a solution to the abiotic polymerization problem. On the other hand, l min must be shorter than ~20 nucleotides for the abiogenesis probability close to unity on a terrestrial planet, but a self-replicating activity is not expected for such a short RNA. Therefore, if extraterrestrial organisms of a different origin from those on Earth are discovered in the future, it would imply an unknown mechanism at work to polymerize nucleotides much faster than random statistical processes.

… to expect the formation of such a long and active RNA by randomly adding monomers.

If randomly adding polymers is all he considers … then yes, it’s darned unlikely. The author is aware of this …

It should be noted, however, that the case of a high abiogenesis rate ( N life ≳ 1 for N * = 1) cannot be excluded by this work, because we assumed that abiotic RNA polymerization occurs only by the random Poisson process of adding monomers. Potential roles of much more efficient processes on the origin of life, such as non-linear auto- or cross-catalytic reactions, have been studied theoretically50, though it is highly uncertain whether such processes really worked in realistic prebiotic conditions.

… and notes other conditions which would change the probability.

My observations on this paper are:

Hello @MikeG, I see you have been here a while already, but thank you for joining the discussion.

I’m not big on multiverses either, but I find the idea that there is more universe than we can observe to be the least unreasonable of the multiverse concepts. That, and the author is a cosmologist, so it is to be expected.

Blockquote Koonin41 considered implications of the eternal inflation theory for the origin of life. In this scenario, most part of the universe inflates forever, self-reproducing many subregions that undergo a conventional inflation followed by a hot big-bang universe. Then an infinite number of stars and galaxies would be formed, and we expect emergence of life even if the abiogenesis probability is infinitely small. Though eternal inflation is a theoretically likely scenario42, it is difficult to confirm observationally, and a quantitative discussion is impossible. It is then interesting to ask if life can emerge within the homogeneous region in which we exist, assuming its minimal size necessary to explain observations. This work tries to give a quantitative answer to this question.

The paper mentioned here is Eugene Koonin’s, and it was about abiogenesis in relation to an infinite multiverse.

Yes I think it’s also important to understand that given certain models of inflation, other “local cosmic expansions” (as I have seen it described) is expected from the mathematics. This idea with other areas of space having given rise to other regions that look like our own universe is not some sort of ad-hoc theory invented to try to explain away something, but seems to be predicted from the mathematics of inflation.

At least that’s how Steven Weinberg described it.

Is the author talking about the multiverse here? There are models of inflation that have multiverses, like the eternal inflation model, but the paper doesn’t mention a multiverse.

Yes I think it’s also important to understand that given certain models of inflation, other “local cosmic expansions” (as I have seen it described) is expected from the mathematics.

Yes, and there is an Ethan Segal article where he describes this as one of the concepts that are sometimes described as “other universes”. NOT the best source, I agree. But if this concept of the multiverse is not true, then much of what we think we know is wrong.