How Did the Giraffe Get It's Neck?

How did the Giraffe get its neck?

Even Ken Ham used this same language in 2005 about giraffes requiring irreducibly complex features to make a long neck but today identifies the long neck as the product of genetic rearrangements of DNA from an ancestor with a short neck.

The Ark Encounter theme park in Kentucky is filled with signs and displays that promote young-earth interpretations of geology, astronomy, biology, archaeology and theology. I have critiqued many o…

Seems this is being simultaneously used as evidence against evolution, and as an example naturally evolved within a created kind. Both can’t be true at the same time.

Fossil evidence and stages of elongation of the Giraffa camelopardalis neck

Several evolutionary theories have been proposed to explain the adaptation of the long giraffe neck; however, few studies examine the fossil cervical vertebrae. We incorporate extinct giraffids, and the okapi and giraffe cervical vertebral specimens in a comprehensive analysis of the anatomy and elongation of the neck. We establish and evaluate 20 character states that relate to general, cranial and caudal vertebral lengthening, and calculate a length-to-width ratio to measure the relative slenderness of the vertebrae. Our sample includes cervical vertebrae ( n =71) of 11 taxa representing all seven subfamilies. We also perform a computational comparison of the C3 of Samotherium and Giraffa camelopardalis , which demonstrates that cervical elongation occurs disproportionately along the cranial–caudal vertebral axis. Using the morphological characters and calculated ratios, we propose stages in cervical lengthening, which are supported by the mathematical transformations using fossil and extant specimens. We find that cervical elongation is anisometric and unexpectedly precedes Giraffidae. Within the family, cranial vertebral elongation is the first lengthening stage observed followed by caudal vertebral elongation, which accounts for the extremely long neck of the giraffe. 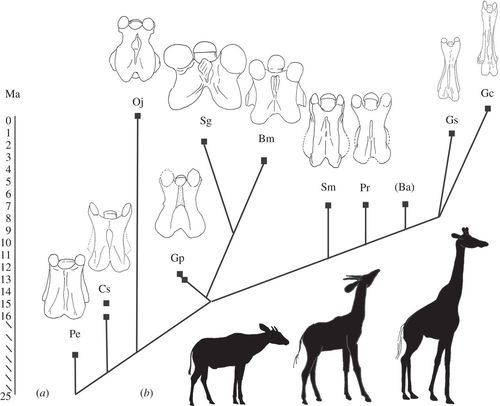 Figure 5. Cladogram with geological age and dorsal view of C3 vertebrae of taxa evaluated. Pe, Prodremotherium elongatum ; Cs, Canthumeryx sirtensis ; Oj, Okapia johnstoni ; Gp, Giraffokeryx punjabiensis ; Sg, Sivatherium giganteum ; Bm, Bramatherium megacephalum ; Sm, Samotherium major ; Pr, Palaeotragus rouenii ; Ba, Bohlinia attica ; Gs, Giraffa sivalensis ; Gc, Giraffa camelopardalis . ( a ) A modified cladogram based on previously published cladograms by Hamilton [13] and Solounias [14], with the exclusion of species not evaluated in this study. Each clade terminates in a square point corresponding to the age of the respective taxon in millions of years (Ma). The dorsal view of a C3 vertebra for each taxon is demonstrated (excluding Bohlinia as there are no known C3 fossils). Each specimen is isometrically scaled so that all vertebrae are of equal length. ( b ) Silhouettes of O. johnstoni, S. major and G. camelopardalis (left to right) are provided to give a comprehensive image of a long-necked, short-necked and intermediate-necked individual

I think giraffe neck evolution is a really interesting question. Because the heart had to change as well to pump all that blood up against gravity. I’ve seen arguments from DI that of course these changes have to be coordinated, yada yada, too improbable, yada yada. But it is an interesting question. Used to have some good papers on it and I’ve seemed to misplace it. Which bums me out.

So I would actually like a biology lesson here. How do changes like that occur? Even in reproduction and development. For example, an offspring develops longer leg bones and is taller than its parents. Like me for example. How do the other systems, like the muscles on the legs, change to match the longer leg bones? Some type of interaction between certain genes? Or… always kind of being curious about this.

There are probably two things going on here.

The second is pleiotropy (one change causes many changes) in complex systems. For example, increasing the length of the neck should cause changes in development (just as a consequence of physics) to put stresses that increase the size of muscles in the neck. This is just because physical stresses are a cue in development to alter and remodel, independent of specific genetics. E.g. by working out and eating correctly, you can dramatically increase the size of your muscles; while genetics has a role, environment has an outsized role in determining the muscle size variation among humans. The same sort of mechanisms (and others) will cascade one simple change into several others.

Together, these factors work together to enable so-called “coordinate” changes. They don’t have to all come at once, but it is possible they come in a loose sequence.

The second is pleiotropy (one change causes many changes) in complex systems.

I wouldn’t call that pleiotropy, but it is a good explanation for coordinated changes. Not sure what the proper name is.

So I would actually like a biology lesson here. How do changes like that occur? Even in reproduction and development. For example, an offspring develops longer leg bones and is taller than its parents. Like me for example. How do the other systems, like the muscles on the legs, change to match the longer leg bones? Some type of interaction between certain genes? Or… always kind of being curious about this.

I don’t know that there’s one-word description for the process of coordinated change, but it is a major subject of the book The Plausibility of Life. Developmental modules have to be robust to changes in other modules (weakly coupled) or ordinary development would fail regularly. As @swamidass suggests, leg length is determined by both environment (e.g. diet) and genes, and muscles have to be able to develop in parallel with bones regardless of how long the latter are; they can do so because their attachment points, and hence lengths, are determined by the bones, not specific genes in the muscle development pathway. This necessary flexibility has the side benefit that it also makes evolution much easier.

The second is pleiotropy (one change causes many changes) in complex systems.

I wouldn’t call that pleiotropy, but it is a good explanation for coordinated changes. Not sure what the proper name is.

Since the question is not about genetics IMO, but about development, the word we probably want is ‘regulation.’ This word has a precise and long history in developmental biology, and to this day you can hear developmental biologists complain about how the word now means something like “control the levels or functions of” as in “activity of X is regulated by phosphorylation by Y.”

In developmental biology, regulation refers to how cells adapt and/or respond to the environment of the developing organism, and embryos characterized by this ability were called ‘regulative,’ in contrast to embryos that slavishly obey a step-by-step blueprint of development–this was/is called ‘mosaic’ development. In this simplistic dichotomy, a regulative embryo can adapt to something being added or removed or enlarged etc. whereas a mosaic embryo cannot.

As we all might suspect, these old (very old) dichotomies are not so useful anymore but the concepts are, since there are developmental processes that are rigid (mosaic) and flexible (regulative) and of course everything in between. Below is a great review of the concepts and how they have changed.

I think the most important point might be (for me) that neither pleiotropy nor co-evolution can explain how an embryo can accommodate changes such as the elongation of a neck or the expansion of a neocortical layer. These changes have to be initially accommodated by development. By cells.

It used to be called epigenetic effects, but the word “epigenetic” has been recruited for something else.

I don’t know that there’s one-word description for the process of coordinated change, but it is a major subject of the book The Plausibility of Life . 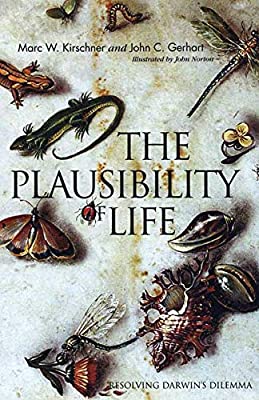 It is genetic covariance between characters, which is predominantly caused by pleiotropy. However, I disagree with the use of the word “coevolution”. It usually means evolutionary changes in one species in response to changes in another species. It is not usual to use it for changes of one character bringing about changes of another within a single species.

Okay. What would be a better way to describe that?

It is genetic covariance between characters

I think this piece in PNAS includes at least some of the main ideas in the book.

The theory of facilitated variation

This theory concerns the means by which animals generate phenotypic variation from genetic change. Most anatomical and physiological traits that have evolved since the Cambrian are, we propose, the result of regulatory changes in the usage of various...

Josh, if you mean the effect of a change in one locus on the fitnesses at another locus, that is called epistatic effects on fitness, or fitness epistasis.

John, it is still genetic covariance. If the effect of the substitution of one allele for another at a locus is (1) the lengthening of the skull, and (2) the lengthening of the optic nerve, then those are pleiotropic effects, causing genetic covariance, whether or not the effects are direct or indirect. In any case both are probably indirect effects – the effect of the change of allele is something like a change in the amino acid in position 237 of a particular enzyme protein. All else is indirect effects.

Probably not. It’s more likely to be a change in a transcription factor binding site to make it more or less strong. But I see your point. “Pleiotropy”, the word, was invented before anyone had a clue about how different alleles produced their effects. Then again, I would suppose that an effect on a single region of the anatomy would have been considered a single effect, which the word being reserved for effects on multiple areas of the body.

For example, an offspring develops longer leg bones and is taller than its parents. Like me for example. How do the other systems, like the muscles on the legs, change to match the longer leg bones? Some type of interaction between certain genes? Or… always kind of being curious about this.

In basic terms, there is an interplay between the development of connected tissues like bones and muscles. They develop together. If a gene involved in bone development is mutated in such a way to make the femur (for example) longer by growing faster, the attached muscles will grow and develop faster to “keep up” with the femur. Depending on the precise tissues or signals involved, this could simply be due to mechanical forces or things like morphogen gradients.

In basic terms, there is an interplay between the development of connected tissues like bones and muscles. They develop together.

Muscle tissue can be stretched to a certain extent to become longer. Children with growth abnormalities sometimes have surgical procedures to lengthen bones, and the muscles are able to adapt. Offspring with somewhat longer legs should not be a difficulty. If additional adaptation is needed for longer muscles, it doesn’t need to occur simultaneously with the longer bones. (At least not for gradual adaptation. This would be a serious problem for YEC hyper-fast divergence of Kinds.)