Really? I dunno. The way both only exist because of bizarre social interactions/group-think of a religious nature seems pretty similar to me. I suppose that Scientology, being much more specific about what it claims, is arguably more coherent, but other than that I don’t see a huge difference. Both groups have a pretty strong tradition of trying to conceal what they actually believe from outsiders, albeit for somewhat different motives. Scientologists are probably more pleasant to have a beer with.

Scientologists are probably more pleasant to have a beer with.

Possibly, but I don’t see IDers engaging in these sorts of activities towards their apostates and perceived ‘enemies’: 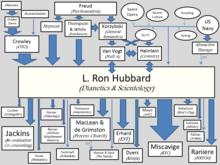 The term Fair Game is used to describe policies and practices carried out by the Church of Scientology towards people and groups it perceives as its enemies. Founder of Scientology, L. Ron Hubbard, established the policy in the 1950s, in response to criticism both from within and outside his organization. Individuals or groups who are "Fair Game" are judged to be a threat to the Church and, according to the policy, can be punished and harassed using any and all means possible. In 1 Applying th...

Yes they did. It then energized the democrats.

The fact remains that your belief that the institution of the Supreme Court would be immune from the radical Christian extremism of the GOP has proven to be wrong. Which is not intended as a knock on you. I would have expected the same. I actually believed that Kavanaugh, Gorsuch, and Barret, while ideologically aligned with the GOP, were first and foremost ethical and competent jurists who would not let their ideology compromise their work once they had won their position on the Court. I even had an open mind regarding Thomas.

Possibly, but I don’t see IDers engaging in these sorts of activities towards their apostates and perceived ‘enemies’:

Well, there are differences. But I’d think that ID, with its ties to religious extremism, Christian Nationalism and whatnot, is part of a movement which is more of a threat to civil society. Scratch a Capitol insurrectionist, and you’ll find a creationist. To the Scientologist, anti-scientologists are the enemy. To the creationist, civilization is the enemy.

I am so gonna make myself a CSI dowsing stick!

Now where did I leave that dowsing stick …

Now where did I leave that dowsing stick …

You’ve gotta be careful with those. I pointed mine at the sky once and it rained for 40 days and 40 nights …

Well, I can see little has changed here. Cargo Cult Science is Pseudo Science. So your post is nonsense.

No that would make it entirely sensible.

I’m doing well. Had a family tragedy in 2020. Retired in 2021. Reconnected with some family I haven’t seen in ages. Looking forward to 2023. Thanks

Your claim was that ID isn’t even pseudo-science, that it is cargo cult science. That is self-contradictory. Your time would perhaps be better served by getting people to stop classifying cargo cult science as pseudo science. Cheers.

Your claim was that ID isn’t even pseudo-science

It’s pseudo-science in that it is like a cargo cult.

Literally, that would require IDers to believe that John Frum will return, bringing lots of cargo, if they only create a proper airstrip for him. It’s an analogy.

Your claim was that ID isn’t even pseudo-science, that it is cargo cult science. That is self-contradictory. Your time would perhaps be better served by getting people to stop classifying cargo cult science as pseudo science. Cheers.

HI Mung
Good to hear from you. I forgot how powerful your wit is in these discussions.

BTW sorry to hear you had to experience a tragedy in 2020.

I was just being nice many years ago. But I am older and much more of curmudgeon now so I now consider ID to be total bull**** including everything from Meyers, Gauger, and everyone else at DI. Regarding Jeanson, I continue to consider him as a lying fool. Wishing you and your family a Happy Winter Solstice.

Thank you for being your old sea-lioning self.