I had to shorten the topic title considerably.

Macroevolution posed difficulties for Darwin and later theorists because species’ phenotypes frequently change abruptly, or experience long periods of stasis, both counter to the theory of incremental change or gradualism. We introduce a statistical model that accommodates this uneven evolutionary landscape by estimating two kinds of historical change: directional changes that shift the mean phenotype along the branches of a phylogenetic tree, and evolvability changes that alter a clade’s ability to explore its trait-space. In mammals, we find that both processes make substantial independent contributions to explaining macroevolution, and are rarely linked. ‘Watershed’ moments of increased evolvability greatly outnumber reductions in evolutionary potentials, and large or abrupt phenotypic shifts are explicable statistically as biased random walks, allowing macroevolutionary theory to engage with the language and concepts of gradualist microevolution. Our findings recast macroevolutionary phenomena, illustrating the necessity of accounting for a variety of evolutionary processes simultaneously. 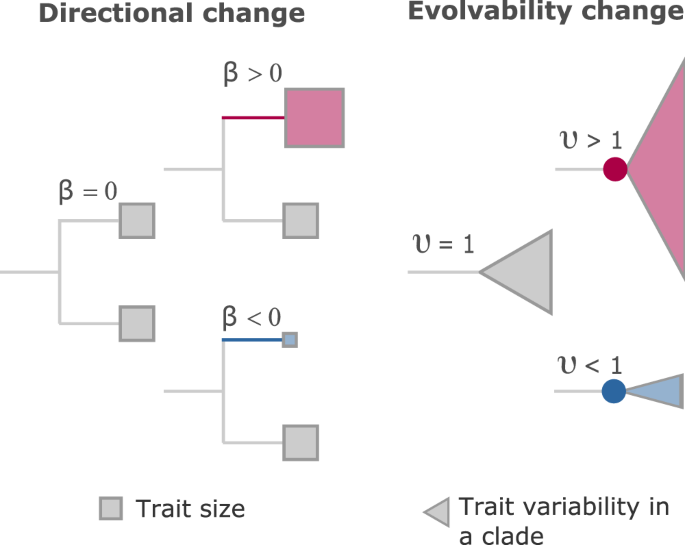 ‘Macroevolution posed difficulties for Darwin and later theorists because species frequently change abruptly, or experience long periods of stasis, both counter to the theory of incremental change or gradualism. Here, the authors propose a...

AND congratulations @Joe_Felsenstein, you made Poll Position in the references.

No. You are ancient.

As is usual with Mark Pagel, I have only the vaguest understanding of what he did there.

Macroevolution posed difficulties for Darwin and later theorists because species’ phenotypes frequently change abruptly, or experience long periods of stasis, both counter to the theory of incremental change or gradualism. …

Not only didn’t Darwin expect evolutionary changes all to happen at the same relatively constant slow speed, but to be fast in some lineages and static in others, but he was even aware of examples of stasis and from the fossil record

Species of different genera and classes have not changed at the same rate, or in the same degree. In the oldest tertiary beds a few living shells may still be found in the midst of a multitude of extinct forms. Falconer has given a striking instance of a similar fact, in an existing crocodile associated with many strange and lost mammals and reptiles in the sub-Himalayan deposits. The Silurian Lingula differs but little from the living species of this genus; whereas most of the other Silurian Molluscs and all the Crustaceans have changed greatly. The productions of the land seem to change at a quicker rate than those of the sea, of which a striking instance has lately been observed in Switzerland. There is some reason to believe that organisms, considered high in the scale of nature, change more quickly than those that are low: though there are exceptions to this rule. The amount of organic change, as Pictet has remarked, does not strictly correspond with the succession of our geological formations; so that between each two consecutive formations, the forms of life have seldom changed in exactly the same degree.
…
These several facts accord well with my theory. I believe in no fixed law of development, causing all the inhabitants of a country to change abruptly, or simultaneously, or to an equal degree. The process of modification must be extremely slow. The variability of each species is quite independent of that of all others. The variability of each species is quite independent of that of all others. Whether such variability be taken advantage of by natural selection, and whether the variations be accumulated to a greater or lesser amount, thus causing a greater or lesser amount of modification in the varying species, depends on many complex contingencies,—on the variability being of a beneficial nature, on the power of intercrossing, on the rate of breeding, on the slowly changing physical conditions of the country, and more especially on the nature of the other inhabitants with which the varying species comes into competition. Hence it is by no means surprising that one species should retain the same identical form much longer than others; or, if changing, that it should change less.

So this isn’t a difficulty for Darwin at all, but something he knew about and even expected, and neither stasis nor relatively rapid change is counter to his theory.

When the first sentence of the abstract is at odds with reality, the expectations for the remainder plummet.

So this isn’t a difficulty for Darwin at all, but something he knew about and even expected, and neither stasis nor relatively rapid change is counter to his theory.

Not a difficulty to be sure, but I don’t think it was intended as criticism. This presents a statistic approach to estimate parameters describing something like what Darwin first stated.

It was probably only intended as hyperboly.

More likely he was just assuming that Darwin had talked of continual gradual development because so many people seem to think that.