Religion and Atheism: My, How Russia Has Changed 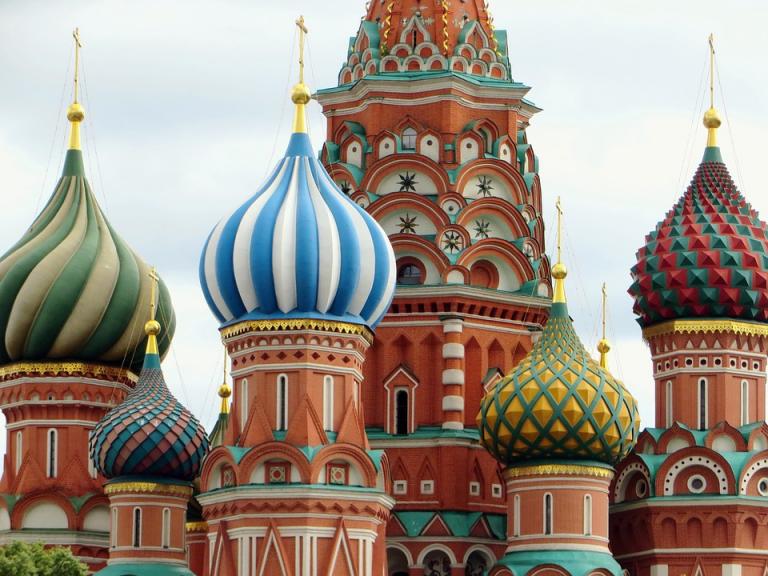 Religion and Atheism: My, How Russia Has Changed.

It's amazing to think how a state who formally supported atheism as a statutory worldview has now got into bed with the church. The Russian Orthodox Church is certainly pulling the strings in the ex-Soviet state. Now, a Russian woman is facing five...

Thanks for the bad news. It’s too bad that the Russians appear to be under a chain of repressive leadership–from oppressive feudal monarchy, to abusive atheism, to restrictive religion. There must be an underlying reason. It can’t be good for either ideology–but especially Christianity. It’s completely hypocritical for a religion founded by a man who said to love your enemies to become oppressive.

I mentioned elsewhere that my wife’s cousin was a Russian historian - sadly, she says, there was always an over-strong link between the Russian Orthodox Church and the state, which she sees being exploited now by Putin etc (though the resurgence of faith after Glasnost was a genuine response to the repressive nature of atheism on the human spirit).

There is a huge difference between state imposed atheism and individual free thought atheism. Our Government, due to the US Constitution’s First Amendment, must remain neutral on religion. It can’t impose a religion on people. At the same time, the Government can’t impose atheism on people as atheism is the opinion, philosophy, or ideology that there is no God. The US Government must remain neutral and let each individual decide whether and if that choice is important to them. Russia, on the other hand, is trying to impose that choice on everyone. In Russia you are either an atheist or a Russian Orthodox Catholic. Nothing in between. That is why Jehovah Witnesses are being labeled illegal in Russia and ejected as an approved religion.

Freedom of conscience was only really hammered out on the anvil of religious conflict after the Reformation. Democratic freedoms followed religious freedoms in the wake of conscientious non-conformity. In other words, your free-though atheism is only possible because of free-thought Congregationalism and Anabaptism.

Russia never experienced that (much like China in my parable of a few days ago), and neither did Muslim nations: most cultures in history have assumed that the state’s religion, or lack of it, is that of the people… dissenters (like Christians in the Roman Empire) being seen as enemies of good order.

The was an interesting BBC programme the other day on how Socrates’ examination of dissidence in a democracy led not only to his own death, but pointed to a permanent faultline in western democracies based on holding freedom and unity in balance: so far it hasn’t been achieved for long. That only became relevant when democracy was revived in early modern times and Socrates and Plato were plumbed for ancient wisdom - democracy had been long dead in Greece.

The programme compared that to China, where the philosopher speaking truth to power was Confucius, whose ideal was order and respect, rather than dissidence. The Chinese CP, I believe, takes the teaching of Confucius seriously, whilst quietly losing his equal emphasis on ancient custom and religion.

Dr Garvey, one of your recommended books is by Roger Scruton. I found this quote last year that interested me so much I am afraid I sneak-read it during church. How do you think that Jesus’ admonition to give to Caesar what is Caesar’s, and to God what is God’s, could work out in Russia, if they say they accept the Bible?
https://www.bbc.com/news/magazine-23723465

Another review of his book: https://rodlampard.com/2017/08/09/barth-scruton-where-gods-revelation-meets-the-west-all-the-rest/

In the 17th Century our country was torn apart by civil war, and at the heart of that civil war was religion - the Puritan desire to impose godly rule on the people of Great Britain regardless of whether they wanted it, and the leaning of the Stuart Kings towards a Roman Catholic faith that had become deeply antipathetic to the majority and a vehicle for unwanted foreign interference. In a civil war both sides behave badly, precisely because the spirit of compromise has fled from the scene. The solution is not to impose a new set of decrees from on high, but to make room for opposition, and the politics of compromise. This was recognised at the Glorious Revolution of 1688, when Parliament was re-established as the supreme legislative institution, and the rights of the people against the sovereign power were reaffirmed the following year in a Bill of Rights.

This raises what for me is the most important question concerning the Middle East today, which is that of reconciling religious obedience and the secular rule of law. That question was debated by the early Church, and indeed raised by Jesus himself, in the parable of the tribute money. In that parable Jesus invites us to render unto Caesar what is Caesar’s and to God what is God’s. In other words, to obey Caesar when dealing with the ordinary affairs of government, while remaining obedient in our personal life to the commands of religion. His assumption was that we could reconcile the one obedience with the other, since the commandments of religion are simple and obvious. Indeed, there are only two of them, namely to love God entirely and your neighbour as yourself. Jesus rightly assumed that those two commandments would never jeopardise the legitimate demands of government, and this assumption was built into its pronouncements by the early church.

Stalin managed to replicate some of the oppressive features of former regimes as a means of state control–idol worship, an inability to question, an inflexible morality, etc. When the edifice of Communism dissolved these went by the wayside. It seems Putin has found a means of reinstituting some of these elements. I’ve heard it said Stalin used the religious regime as a model to an extent. He was schooled in a seminary for some time.

Freedom of conscience was only really hammered out on the anvil of religious conflict after the Reformation. Democratic freedoms followed religious freedoms in the wake of conscientious non-conformity. In other words, your free-though atheism is only possible because of free-thought Congregationalism and Anabaptism.

This always strikes me as a simplistic arc to put on things. European thought wasn’t going to be trapped within Catholic restraints forever. The Reformation played a major role, and not to negate its importance, but it seems more like an inevitable first step than the progenitor of all the developments that followed.

@Randy
I’ve not read Scruton on this before (I like him generally, though the book on my list is an overview “primer” of philosophy), but he seems to echo what I said to Patrick, and apply it further to western culture. How does one maintain an ethic of “live and let live” when you know you’re right and they’re parasites/oppressors etc?

We had a lone Marxist at medical school (one had to pity him - “I’m the only socialist among 600 fascists.”) When bored in lectures he didn’t read Scruton like you (take a Bible next time??

), but made lists of people who would be shot come the revolution, including the Christians. Being friendly with me he said that I’d no doubt see the wisdom of the new atheist regime on that day, so I’d be OK.

Jesus rightly assumed that those two commandments would never jeopardise the legitimate demands of government, and this assumption was built into its pronouncements by the early church.

“Legitimate demands” being the operative concept. Jesus did no wrong but was condemned by his own country’s council and the Roman governor - yet he also sent a message to Herod as “that fox.”. Paul himself died as a victim of the state - and yet was willing to use his Roman citizenship to insist on an apology from the Philippian authorities for illegal treatment.

I have Christian friends in Russia, and the balancing act between obedience to the state and asserting lawful rights is a tough one. It’s hard to see how one would not simply become a militant rebel if one didn’t sense the call to accept suffering from a power higher than the state.

We had a lone Marxist at medical school (one had to pity him - “I’m the only socialist among 600 fascists.”)

That’s so funny. My best friends in med school were a Marxist Korean and an African American from Indiana–we 2 Christians and an atheist/agnostic. His attitude was very pleasant, though–he said Jesus was a Marxist. Can’t really disagree with him, except Jesus didn’t enforce communal living. He even borrowed my “Pray Hard” T shirt with holes in the knees on the day of the exam. I doubt very much he had any designs on our heads except that he took us to Korean food and nearly burnt out guts out with kimchi and pogichi.

No, Jesus is not a Marxist. He did not say that religion was the opium of the people; on the contrary, Marx did.

It is true that the early Christians shared food and other things to help each other out during bad times; however, that was not Socialism or Communism. They did not share if they did not wish, and they were not forced to do so. They also believed in monotheism whereas the Communists have an atheistic philosophy with no hope in this life and none beyond death. We Christians have hope to look forward to.

You’re right that he didn’t say that. I think that my friend was referring to the practice of equality, sharing what one has and treating others the same as you’d like to be treated. I don’t think Jesus would have approved of enforcing such a strict rule by guns.

“You vill be compliant with the state’s demands for generosity, or ve vill shoot you.” 1 Hesitations 9:11. : )

I have not writing much recently since I have been ill. I do hope everything is going well with you.

“The beatings will continue until morale improves!”

“The people have failed us! We will elect a new people!”

Charles,
Sorry to hear that you are ill. Hope you improve soon. Continue to check in here, as the place might be very therapeutic like watching a old movie, , in reverse, … in a different language, … with no popcorn but with friends… … Take care and I look forward to talking you you again about nothing or something in the nothing or anything you’d like.

Good Humor. You are also a good friend.