Can you please comment on the state of Christianity in the UK? Is the Church of England nearly gone? Are the majority of people in the UK now Nones?

And do you know @jongarvey? Don’t all Brits know each other?

2 posts were merged into an existing topic: Getting to Know TheMan (8469)

Even after he was asked to stop, Francisco Ayala repeatedly directed unwelcome attention toward women, university found

Gonna give that a read. Being a new Christian, it could help.

And do you know @jongarvey? Don’t all Brits know each other?

It’s a complicated picture. In recent history, UK has been one of the most secular countries in the world anyway, and (separate thought) it has been institutionally secularizing far more thoroughly than America for a long time, despite constitutional matters like the monarch, whose authority rests on a Coronation Oath, as head of an established Church and so on. I’ve mentioned before, I think, how in America, a Christian physican might talk about praying with patients - whereas here, NHS doctors and nurses have been struck off for so doing.

It’s no secret that education, entertainment, popular music, journalism and politics - the institutions that shape society - are all dominated by secular humanities-trained graduates. Science is different - that has an older tradition of hard-nosed Enlightenment secularism, as we know. And so Brian Cox can think the scientists could do Brexit better than the politicians, but they’re all convinced that no intelligent person would take God seriously.

Therefore, it is no surprise that church attendance has declined, and correspondingly that young people have increasingly checked in as “Nones” - but it’s scarcely unlikely when they come from secular homes, receive no significant religious education in schools or on the media, or even get told in history that Christianity has had an influence on the nation. Back to them in a minute.

Within the churches, “churchianity” has been dead for most of my adult life, though particularly in the Anglican denomination and some of the other major denominations, a liberally-trained leadership has assisted the decline both by being seen to bow to every wind of sociological change in a bid to be “relevant”, and by not teaching the Gospel people need to hear, and respond to when they do. Obviously a “state church” is particularly vulnerable to reflecting “state values” - that has always been the case, from Henry VIII through colonial times, and hence the strong tradition of orthodox Christian dissent here.

The relationship of church attendance to what is taught is shown by Anglican dioceses (eg London) that are bucking the trend by growing strongly, apparently dependant on the bishop and his leadership - for one trend in more recent years is that liberalism is an old people’s belief, and young ordinands are largely Evangelical in orientation.

Evangelicalism always having been counter-cultural here, it seems to have been less susceptible to dilution of doctrine than in the US, and where teaching is good, churches grow whether they are Baptist, Salvation Army, New Frontiers or Anglican. My last Church was non-affiliated, and tripled in size while I was there, acquiring a very strong youth contingent in the process. I’m now in a village Baptist Church - not a vibrantly growing or large local community, yet our numbers too are slowly growing, though our young people universally go off to college and move away.

A word about Young Nones (not “Nuns”). My 11 year old granddaughter, secular household. Her local state primary school has some residual Christian heritage, doing nativity plays with actual Christian songs, and over the years she was really excited about these, singing them to us when she visited. On summer visits here, she attended our Church’s Holiday Bible Club, and was so enthused that she insisted on coming back every year for it, and whenever they visit for the weekend she pleads to be allowed to go to our small Sunday School.

Dad doesn’t forbid her, but usually plans something else instead, and if she asks him about God, he gruffly replies that some people do that sort of thing, and some don’t. Parental indifference is educational, of course. Back home, guess when team hockey practice is held or family outings undertaken?

In fact, whenever one considers young people’s church attendance here, one must factor in that nearly all sports and adventure activity takes place on a Sunday - as does, as they grow older, quite a lot of part-time work. A teenager has stood down from our music group because her boss wants her to work more Sunday hours… a choice to pursue religion actively, then, is also a choice to abandon leisure pursuits and the beginning of economic independence.

Back to my granddaughter… she goes to secondary school this year, and as she blossoms as a hockey player, or anything else, those Sunday and evening training will increase. She’ll likely be taught science is opposed to faith, and the religious education curriculum will be a comparative religion “view from nowhere” linked to secular discussion of personal values. To emerge from that as other than a “None” would be something of a miracle anyway, don’t you think?

And yet… it is reported that the" irreligious" young are less anatagonistic to, and more receptive to, Christianity than previous generations. They’re not affiliated, and they know little, but that doesn’t make them convinced atheists. It is not entirely clear whether their openness reflects the de-suppression of quenched spirituality or merely apathy. After all, the trends are also to be explained of why young people are reportedly also not drinking, doing drugs or interested in sex: is it a rejection of failed liberalism, or addiction to social media?

One last point - The Hump of the Camel began life at BioLogos, and so has always been orientated to America more than anywhere else. People only read it if interested in science and faith. But we get just shy of 1K UK hits a month - almost proportional to the US, at >6K. So religion isn’t dead in the UK… or China (1200), Sweden (770), or Netherlands (300), all considered very secular countries.

It was the dubious BioLogos response - and especially Ayala’s “noview” - to Stephen Meyer’s Signature in the Cell which, after 18 months of “debunking”, finally persuaded me to read it. I blogged on my response, it was picked up by other sites, and that’s essentially how The Hump of the Camel took off.

The Ayala “review” has now, it appears, been taken down from the site, but never disowned - ironically both Meyer’s reply, and Darrel Falk’s defence of Ayala against it, are still there. “Never Apologize, Never Explain.”

One more edit - still back in 2011, Darrel Falk e-mailed me when he saw my Signature in the BioLogos blog about its uncomplimentary nature, not realising that I and BioLogos “were so far apart.” I replied along the lines that I would have posted the same on BioLogos if it hadn’t been old news, and that my commitment to truth was the same at either venue.

Now, though, there’s a kind of silent vindication of my critique, which should perhaps be noted by those who think I’ve been too negative towards them: the BioLogos articles have been taken down, and mine still stands.

The BVG theorem is basically an incompleteness theorems. All past-directed timelike and null geodesics, reach the boundary of the of an expanding/inflationary region of spacetime in a finite time (finite affine parameter in the null case), there are possible exceptions but these form a set with a measure of zero. Its validity is beyond question, its scope is immense as it does not reply on Einstein’s equations and does not assume any energy conditions. It holds in all cases in which the average expansion rate over the geodesic is strictly greater than zero - H(av) > 0.

Models such as Carroll-Chen cosmic egg, avoided this by setting up a model with a non-positive value of H(av) (I am simplifying here but this is a very complex area). The reason the Carroll-Chen model failed is briefly explained in my other posts. The Cosmic Egg fails as quantum instabilities would force it to collapse after a finite amount of time and if it ‘cracked’ thus leading to the big bang, then this must have happened before it collapsed – and therefore also after a finite amount of time. There is a good bit here https://www.newscientist.com/article/mg21328474.400-why-physicists-cant-avoid-a-creation-event.

The boundary as in the Wall article can be some quantum “wall”. However when Wall states “In other words, the quantum uncertainty in concepts of “space” and “time” become so large that our classical concepts break down”. This is not correct as there is nothing to suggest that on very small time and length scales, quantum fluctuations in the structure of spacetime could be so large classical concepts of causality become invalidated. In this case the BVG is still valid. As Vilenkin made clear in his Cambridge address for Hawking’s 70th birthday "All the evidence we have says that the universe had a beginning.” Wall points are not wrong but if he is correct he is describing something that no properties can be applied and it pretty much seems indistinguishable from nothing or even a formal contradiction.

The Kalaam cosmological argument remember is in two parts, one part philosophical and the other scientific. Craig has no proof in either case but that is philosophy and physics. Proof only applies in the cases of logic and mathematics and in the latter discipline, proof is relative only to theorems derived from a formal axiom system.

Jon thanks for that bit of support. Dennis Venema’s refutation of Meyers by attacking arguments that Meyer did not make was surreal. I gave up on Biologos long ago; but I was aware of Deborah Haarsma criticising Tom Keller for an argument that Keller never made (and shutting down any mention of it on the site). Venema’s rudeness to Swamidass and Praveen Sethupathy getting Asa Gray completely wrong. So I guess nothing has changed.

Dennis Venema’s refutation of Meyers by attacking arguments that Meyer did not make was surreal.

No - Venema spent five posts showing how Meyer was wrong to argue that evolution could not make new biological information, when the entire book was about the origin of life, not evolution at all. Venema was arguing against what he wanted the book to be about.

A number of people pointed this out to Dennis in comments (not me, as I’d not read it), and asked when he was going to address what the book was arguing, but he just beavered on with successive posts, and origin of life was never addressed. Weird.

He Addressed Meyer’s OOL arguments in a series of blog posts later on.

When Prior Belief Trumps Scholarship

The power of scientific reasoning derives from the complex interplay between the desire to know, the ability to reason, and the ability to evaluate ideas with data. As scientists, we have learned how to make ideas dance with reality, and we expect...

and hear the later dialogue between Meyer and the review’s author Charles R. Marshall? 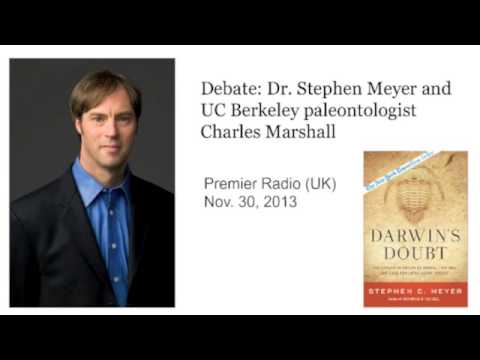 Charles R. Marshall in the review accused Meyer of having a lack of “lack of scientific knowledge” and his “systematic failure of scholarship”. None of these deficiencies were evident in the discussion.

There is an old tradition of dishonest and intellectually overmatched people attacking a ‘straw-man’ version of an idea or argument. Dennis Venema did something new; instead of a straw-man his arguments were directed at what I can only describe as a ‘no-man’. I have never seen anything like it before. In fact the entire Biologos response to SiTC by Falk, Alaya, Venema is probably best forgotten.