Perhaps this needs a thread of its own, but a FB friend points out this, the begging of a series of AiG articles decrying even minor accommodation of evolution, no matter how reasonable.

I take this as a sign that AiG knows its position is weak, and is acting to crack down even harder against dissent from within. 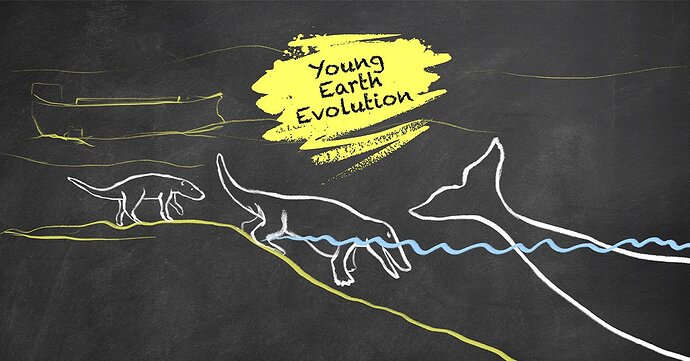 Subtle ideas that don’t comport with Scripture or are unnecessarily accommodating of evolutionary ideas are causing problems within the church.

It is not at all clear from this article how the “Young Earth” in “Young Earth Evolution” comes into it. There appears to be no “Young Earth” in feathered dinosaurs (though I’m amused that they dismiss all the fossil evidence as “no reason (and no real data to back up this claim)”).

I see it as “hard liners” taking a stand against those saying waitaminute maybe feathers are OK, or any other modification that science might have gotten something right after all.

The label “Young Earth Evolution” would in fact appear to be better fit for the ‘hyperevolution’ required to get from the limited number of kinds that would fit on the Ark to the biodiversity we see today.

It appears that AiG is going to make an arc out of this. Here is an opening installment

First uppers for denunciation include Kurt Wise and Todd Wood, so it appears that tolerance has very much narrowed indeed. They criticize Wise for his “claim that whales walked off the ark as four-legged animals.” For discussion, see Joel Duff Walking Whales On Board Noah’s Ark: The Inevitable End-point of Creationists’ Post-Flood Hyper-Speciation Belief?

Ken Coulson, whom I am not really familiar with, and Todd Wood, come under fire for allowing that there is any ambiguity in the evidence. Apparently, when AiG states that the evidence is the same, and they just look at it with a creationist lens, nobody is permitted to even acknowledge the scientific view.

Maybe, AiG feels threatened and is lashing out, perhaps they think themselves unassailable as the priesthood of origins. But these are very odd targets. Wise and Wood were instrumental in the whole YEC shift from micro evolution limited to a bit of size and color, to allowing the vast tally of species to derive from a few hundred created kinds. AiG’s Jeanson built on this foundation. That AiG is choking on what is a matter of degree demonstrates just how arbitrary the whole baraminology exercise really is.

But this still leaves the label “Young Earth Evolution” more than a little of a misnomer.

Consider this from the YEC perspective: Hardliners are labelling the dissenters with the evil evolution buzzword.

In this case “hardliner” likely means Ken Ham specifically. He’s not known for sharing control of the ministry.

I see they’re finally cracking down on Todd Wood and Kurt Wise for their acceptance of the horse and whale evolutionary series. Because everyone knows that the Bible says “And God created the pakicetids and ambulocetids and protocetids and odontocetes and mysticetes separately, each one reproducing after its own kind.” AiG is clearly no longer interested in what’s biblical or not (if they ever were); they just want everyone to agree with what they say.

I see they’re finally cracking down on Todd Wood and Kurt Wise for their acceptance of the horse and whale evolutionary series.

I see they’re finally cracking down on Todd Wood and Kurt Wise for their acceptance of the horse and whale evolutionary series.

In looking up references to the above, I noticed something interesting. Wood has an article on his blog that includes the following quote:

I described my own interaction with the horses in an article for Answers , Horse fossils and the nature of science. In a nutshell, using baraminology techniques, I found (to my surprise) that all fossil equids appear to belong to a single baramin, and are thus descended from an ancestral pair of horses on the ark. To be blunter than I could be in Answers , the evolutionists got that one right, and we creationists appear to have gotten it wrong.

However, when you click on that link you are taken to an AiG article that, while about horse evolution, is not attributed to Wood and does not resemble the summary he gives above. The AiG article is also dated several months later than Wood’s blog post.

I can only conclude that Answers in Genesis deleted or moved Woods original article acknowledging that “the evolutionists got… one right” and replaced it with one with which they were more ideologically comfortable, but kept the same URL so readers of Woods’ blog would be directed there. Classy,

I don’t know which day corresponds to the Devonian period, but apparently God saw fit to create all the transitional tetrapods and then just stopped back then.

Still, I don’t know what to do with sea otters, sea snakes, and such.

And what does one do with a sea cucumber? (Unlike the land cucumber, it’s just not all that appetizing on the garden salad at Red Lobster.)

Put him in the scuppers with a hose pipe on 'im?

Still, I don’t know what to do with sea otters, sea snakes, and such.

I strive to avoid sea snakes, like this 0.8-m one I saw three days ago: 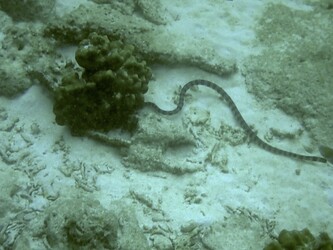 While they aren’t aggressive, I’m not sure how they would judge my being in the way of getting some air. On second thought, maybe this belongs in the discussion of intentionality.

He sees sea snakes by the sea shore?

On second thought, maybe this belongs in the discussion of intentionality.

One of the really great things about sea snakes, in my admittedly limited experience, is that they rarely confuse abstractions for real things. That would certainly help that discussion, even if the snake were a bit bitey.

One of the really great things about sea snakes, . . . is that they rarely confuse abstractions for real things.

True 'nuf, but If I were confronted by a sea snake on this forum, I might be driven to abstraction. (Would I be able to keep as cool as a sea cucumber? Don’t know.)

I remember the philosophical murder thriller “Fatal Abstraction.” Glenn Close boils a sea cucumber in that one while contemplating the nature of consciousness and wondering whether it suffers.

One advantage of treating animals purely as abstractions – it’s very difficult to seriously harm an abstraction.

Maybe this move is in response to the fact that people such as the respected denizens of Peaceful Science have forced the hands of AiG, ICR, CMI, etc., by constantly focusing on Wise, Wood, et al. in their critiques of YEC. If you constantly focus on a single small group of YECs and claim they are closet evolutionists and agreeing with evolutionists in certain respects, then you cannot come out and attack those organizations for distinguishing themselves from them. You forced them to by constantly presenting YEC as fairly represented by Wise and Wood, as people like @Joel_Duff constantly imply, when that school is a minority within YEC. AiG, et al are protecting themselves from criticism coming from you guys.

I would be happy to have so much influence, but it seems unlikely.

However, this also fits the general strategy of AiG; find someone making a reasonable claim and slam them for being un-Biblical compromisers.