Their Y chromosomes were also similar and came from a modern human ancestor, like those of the only three other male Neanderthal genomes known.

Very interesting and how do they know this? I don’t remember this from Reich’s book. Too bad the info is from a talk not a paper, so I don’t see any references.

Very interesting and how do they know this?

Too bad the info is from a talk not a paper, so I don’t see any references. 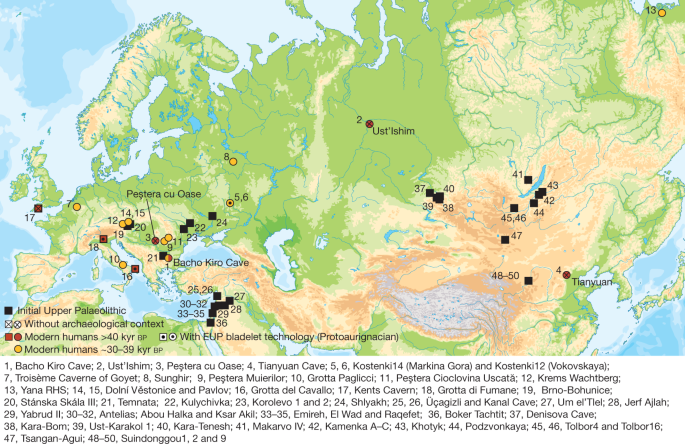 Genome-wide data for the three oldest known modern human remains in Europe, dated to around 45,000 years ago, shed light on early human migrations in Europe and suggest that mixing with Neanderthals was more common than is often assumed.

So this is fun. It seems this is more than a headlight changing color. This seems like deciding the car was put together much differently than was thought.

Our understanding of the origin, distribution, and evolution of early humans and their close relatives has been greatly refined by recent new information. Adding to this trend, Hershkovitz et al. have uncovered evidence of a previously unknown...

But when anthropologists analyzed the remains of the skull, the only human remains found at the dig, they were in for a surprise.

“It looks nothing like Homo sapiens ,” Hershkovitz says. The bones displayed a puzzling mosaic of primitive and more advanced features, such as an unusually thick skull and a wide, low, flat - almost squashed – cranial shape.

The researchers conducted advanced three-dimensional shape analyses and evaluated multiple physical traits to compare them to other known Homo specimens and figure out which species it belongs to.

The Nesher Man skull doesn’t fit any known hominin group, says Tel Aviv University anthropologist Hila May, who also took part in the study. Some traits fall within the range of Homo erectus, the first hominin to leave Africa and spread across Eurasia around 1.9 million year ago, she says. Other features are more typical of Neanderthals, particularly the earliest specimens that appear some 400,000 years ago in Europe.

Top/bottom is typically numbers of differences or temporal, not a particular species.

Do you realize that the order in which species are listed, at a right angle to the time/changes dimension, is completely arbitrary? It’s like those hierarchical, rotating mobiles for babies: