Man, what is with this week?

Paper about a new ancient human came out that says neanderthals originated in the Middle East, now we have scientists writing about large humans closely related to homo sapiens… 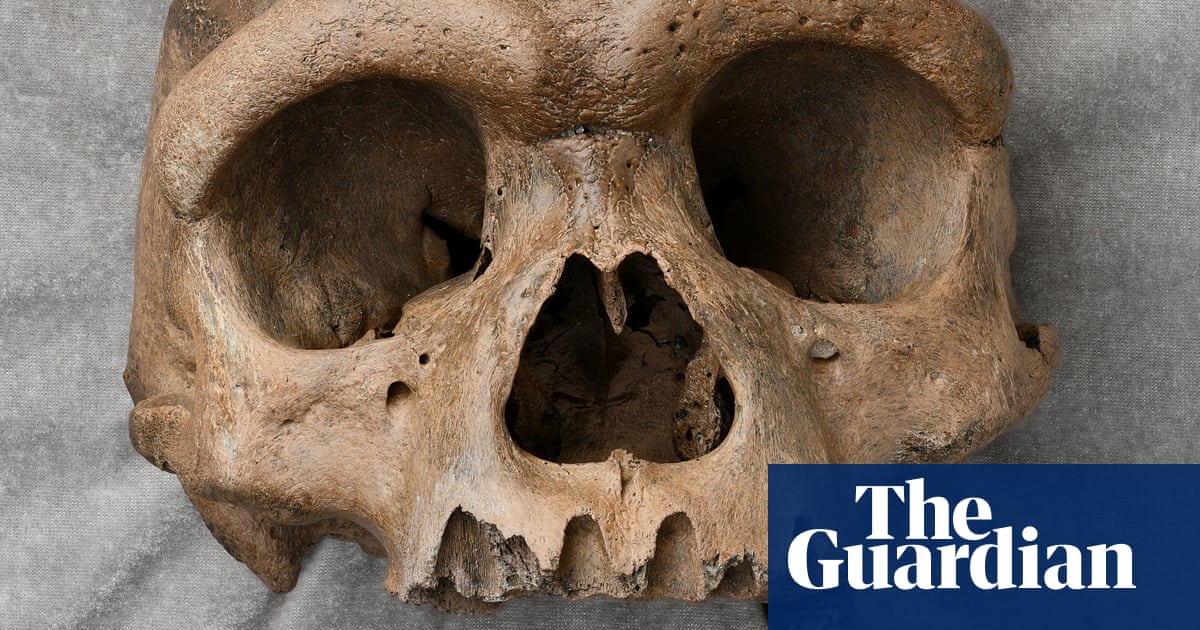 Nephilim and Gigantopithecus blackii - #66 by thoughtful

The only dragon man that matters:

The other find announced today that @thoughtful was alluding to:

A new type of Homo unknown to science: Dramatic discovery in Israeli excavation

Oh darn. I already have to throw out my hypothesis.

I measured my ogre head (which is probably larger than my husband’s who is 6’4") and it is about the same as this dragon guy’s. Haha. So he’s not that tall, just ogre tall - like over 6". Not nearly as exciting.

Either way…I’m not surprised they found a giant guy as an ancient book seemed to think they existed.

I wonder where you got the notion the guy below (from the Guardian article) was a “giant”?

Edit: since you changed your stance on the stature of the “new human” find, ignore my second request.

The sloping forehead and impressive brow ridges definitely place it outside of H. sap (IMHO).

You probably didn’t see my earlier post before you posted, but I was waaaay too early on that one. Oops. This doesn’t confirm anything about the Bible - so I can edit my post. There’s just some tall genetics in the ancient past obviously. And no, I’m not silly enough to think that a picture such as that is evidence. It’s silly and misleading.

It was this part of the article and how much he scientists were quoted that I was relying on, but it’s a bit hyperbolic so I should have been more careful. Also I forget what average is, since I’m so much taller but feel like a modern human.

The skull, which is 23cm long and more than 15cm wide, is substantially larger than a modern human’s and has ample room, at 1,420ml, for a modern human brain. Beneath the thick brow ridge, the face has large square eye sockets, but is delicate despite its size. “This guy had a huge head,” said Stringer.

The researchers believe the skull belonged to a male, about 50 years old, who would have been an impressive physical specimen. His wide, bulbous nose allowed him to breathe huge volumes of air, indicating a high-energy lifestyle, while sheer size would have helped him withstand the brutally cold winters in the region. “Homo longi is heavily built, very robust,” said Prof Xijun Ni, a paleoanthropologist at Hebei. “It is hard to estimate the height, but the massive head should match a height higher than the average of modern humans.”

Basically, when I checked what human heads are like today, the size seems to be just a very large modern human. So then it’s not surprising the computer placed the skull on that part of the family tree. It’s just that the shape is more archaic. Seems transitional and he’s probably a taller compared to the rest of the humans around him, much like me.

For reference just Incase no one has any idea what I’m talking about lol:

No backup. Its gone. It was a response to Valerie, but it seems like the Lord did not will it so I will let it go.

he sloping forehead and impressive brow ridges definitely place it outside of H. sap (IMHO).

I presume this is a reconstruction and not the the actual skull, right? It seems remarkably intact.

I presume this is a reconstruction and not the the actual skull, right? It seems remarkably intact.

I’d be curious to know as well. Articles have said it’s remarkably intact, yet I’ve also seen that labeled a reconstruction.

Btw, I was going to mention ‘dragon Man’ sounds fierce but it was just found near Dragon River. Homo longi sounds less impressive.

I know the “Homo longi” is probably derived from the estimated height of Dragon man, but I agree its not cool enough. Maybe Homo ignis (fire man) or Homo draco (dragon man) would be fine, but I don’t think that would be based on any facts about the fossil.

“Dragon Man” is going to stick. He’ll die with that name.

I don’t believe he will die again as long as we live. If his DNA is sequenced, its likely we will find chunks of it in our genomes (well maybe not in mine, an African). If so, Dragon Man lives on forever.

Dragon Man actually belongs to Marvel Comics. He was introduced in Fantastic Four #35.

I know the “Homo longi” is probably derived from the estimated height of Dragon man,

I believe “longi” is actually the transliteration of the Chinese word for “dragon.” So it literally means dragon man.

If his DNA is sequenced, its likely we will find chunks of it in our genomes (well maybe not in mine, an African).

I was randomly googling something about craniums a few days ago, went to a webpage about what skulls looked like based on ethnicity and it mentioned Africans having square-shaped eye sockets. 🤷 Dragon man also did. So who knows?

I guess the Israeli scientists who just came out with Nasher Ramla think dragon man could fit into that category too because of morphology. Haha. They’ll be discussing it for a while. But then he might be ancestral to some Africans, so who knows.