A Compromise on Creationism 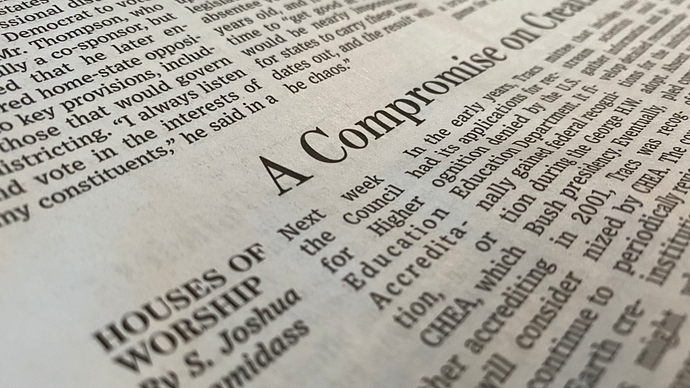 A Compromise on Creationism

So this is the full article, released about 30 days after initial publication.

I have been completely swamped this semester, but this is pretty interesting to me and professionally relevant.

Overall, I see where you’re going here (sort of a laissez faire, live-and-let-live, pluralism) but I have some concerns with your proposal, both pragmatic and philosophical.

One helpful principle is transparency. As a matter of academic freedom, scientists should tolerate institutions that teach creation science. But deviations from national norms in a science curriculum need to be prominently disclosed, tracked and reported. In practice, that means transcripts that clearly state which courses and degrees include creation science. Credit from courses that include creation science should not be used toward science degrees. Nor should they be eligible for transfer to secular institutions.

Philosophical Concern: I have a bit of a hard time squaring “academic freedom” with requiring the “tagging” of non-mainstream views. Should courses from professors who disagree with consensus on controversial subjects (climate change, gender & sexuality, politics, etc.) be similarly tagged in student transcripts and evaluated differently for credit transfers? Also, who gets to decide when a course includes “creation science”? I’m not a big fan of that level of “invasiveness” into curricular content.

Pragmatic Concern: Would the accreditor and institutions have to hire compliance coordinators and institutions provide detailed records of what was actually taught in the classroom? How in the world would you actually determine what is and isn’t a course that includes creation science? Is it the course content or the instructor? Many Christian universities will have a course that discusses creation science without saying that it is an official university position. What would happen to non-TRACS schools that have either courses or instructors that teach creation science?

Bottom-line, I appreciate the gesture towards tolerance and pluralism in the public sphere, but I just don’t see how the proposal would work practically and would be afraid that it could be easily abused or weaponized against Christian higher ed in general.

TRACS is a blip on the radar and I’d be fine if CHEA got rid of it completely. The problem there isn’t the teaching of creation science, it’s an accreditor being used as a pawn by an organization (ICR) to make a cultural statement. College of the Ozarks (accredited by both TRACS and HLC) is a good example of why TRACS is unnecessary. Schools are not banned from being accredited by virtue of how non-mainstream the science in their classroom is, so what’s the point?

Have you read the linked Q&A yet?

Most of it yes. I felt like it addressed different question/concerns than the ones I have, but I could be wrong.

For instance, you talk about “creationist institutions”, but I don’t care that much about the overtly “creationist” institutions like BJU. I’m more concerned about CCCU schools, who have a variety of position statements (some of which would be “creationist”) and faculty all along the origins spectrum. Why should CHEA limit themselves, under your proposal, to TRACS. In fact, I could see TRACS suing if such a policy wasn’t applied to SACSCOC, HLC, etc. So where does that leave Christian higher ed as a whole? This proposal feels like drawing a line in the sand and asking institutions to choose (“are you creationist or not?”) and then treat them differently depending on the answer.

I get the impulse to try to keep the peace, and yet move science forward, but I would be concerned about the broader ramifications and unintended consequences.

Why would CCCU schools object to applying their belief statements with fairness and transparency?

Don’t most non-YEC CCCU schools teach science aligned with national norms already? So why would they object to accreditation processes that give them a checkmark here, so that there is less reason to question their science credits?

Why would CCCU schools object to applying their belief statements with fairness and transparency?

Because schools have various granularities of belief statements and sometimes difficult relationships when it comes to belief statements: denominational leaders, powerful external constituents, administrators, faculty, and students may have very different interpretations and expectations.

To put one ramification bluntly, if TRACS was accredited as a special “Creationist Accreditor” then many of the CCCU schools (more in some parts of the country than others) would start getting inquires as to why they weren’t accredited by TRACS and there would be pressure to do so for many. That would then put faculty and administrators in the hot seat to either establish or defend clear positions on YEC. It could create a rift between faculty and parents/donors/denominational leaders and at enrollment-dependent institutions there is a lot of pressure to keep constituents happy.

The problem is “non-YEC” schools, I would think most CCCU schools do not want to be pegged as either YEC or non-YEC, that’s my point. Yes, I would guess the vast majority of CCCU biology departments teach “teach science aligned with national norms” but frankly in some areas there is a lot of pressure for them not to (or it at least creates a lot of tension). Some denominations have been trying to keep a “wide tent” view on origins but it’s really difficult and something like this seems to be a “time to choose sides”, which puts a whole lot of faculty in a bad position.

But even with “teach science aligned with national norms”, what about OEC and ID folks? In the Q&A you say you’re not talking about them, but OEC and ID is generally not considered “science aligned with national norms”, at least a significant portion of the scientific community that would say so. So how are you going to practically limit it to YEC?