Care and feeding of ocean-going zoos

Not according to the major professional creationism advocates, all of whom suggest the animals were placed into some form of suspended animation (in order to avoid having to deal with food/water requirements, predation and having offspring).

I note from your reference that “As much as 12 U.S. tons (11 m. tons) of animal waste may have been produced daily. The key to keeping the enclosures clean was to avoid the need for Noah and his family to do the work. The right systems could also prevent the need to change animal bedding. Noah could have accomplished this in several ways. One possibility would be to allow the waste to accumulate below the animals, much as we see in modern pet shops. In this regard, there could have been slatted floors, and animals could have trampled their waste into the pits below. Small animals, such as birds, could have multiple levels in their enclosures, and waste could have simply accumulated at the bottom of each. … Alternatively, sloped floors would have allowed the waste to flow into large central gutters. Noah’s family could have then dumped this overboard without an excessive expenditure of manpower.”

Note that their ark only has an opening at the very top.

How would you feel about carrying two tons of manure up all those ladders every day? 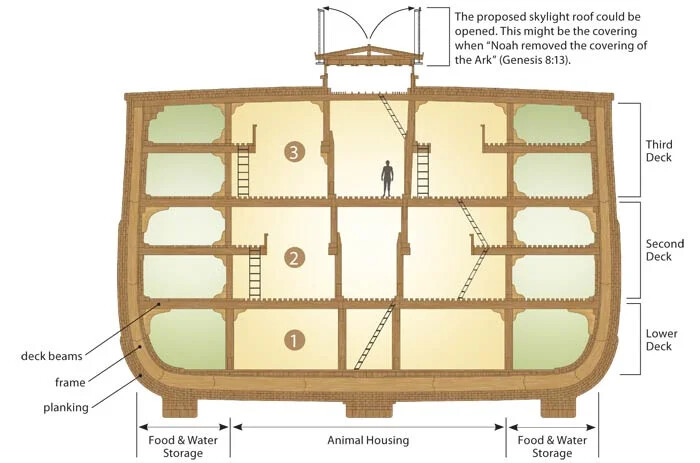 Because mutation rates are similar across different species. They’ve been measured.

Out of time - will reply tomorrow.

I will just comment on the fact that people in the original thread are attempting to have an adult scientific discussion with someone who takes that AiG article seriously.

I wish them luck.

Give an example of a baramin phenotype that creationists have described and we have not found in the archaeological record.

All Aboard—Unexpected Passengers on Noah’s Ark

Visitors to the Ark Encounter are often surprised by the animals that are “missing.” At the top of many lists is one of the great icons of Noah’s ark: long-necked giraffes.

Go ahead and look around. Walk the ship from bow to stern, port to starboard, bottom deck to the top. Nowhere will you see a pair of classic giraffes towering above your head.

What you will find, housed in a large enclosure on the middle deck, are some spotted creatures, perhaps around your height, with relatively short necks and stocky bodies. These odd-looking beasts look strikingly like Shansitherium , a creature you’d find in a few natural history museums. Yet the sign indicates that these are the Ark Encounter’s representatives of the giraffe kind. How could this be?

So it is the AiG position that Giraffes descended from some phenotype absent the historical record. But what we see from deep history is this: 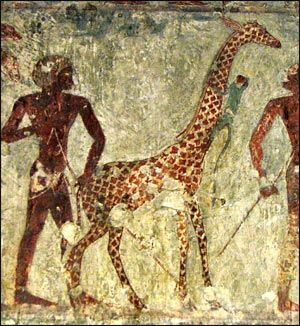 Ironically, the giraffe has been a past exemplar offered by creationists as an example of an animal that could only have been created as such, given that much physiology has to be adapted to its elongated neck.

The giraffe’s neck: another icon of evolution falls

A problem for evolution is that the giraffe’s entire body—both its anatomy and physiology—is tightly intertwined as a single functional unit. The giraffe is actually an excellent icon for intelligent design because its extreme complexity requires all of the pieces to be in place before its neck structure is functional.

Many have asked how the giraffe got all these interesting features. Some suggest that you can start with a non-giraffe and, through successive small changes, end up with a giraffe. However, the fossil evidence of giraffes in the past shows them to be much the same as the ones we see in Africa today. Fossil evidence of transitional forms, or ‘not-quite-giraffes’, is “completely lacking”.

So, just like that, creationists have gone from the giraffe no way no how could have evolved over millions of years, to done in a couple of generations, no problem.

Thanks for that. That’s better than The Onion.

It’s all just assertion. “They could have done X” is just declared with zero supporting evidence. No calculation of space or amount of work required anywhere. It’s just got imaginary drawings of the ark, and a bunch of assertions.

“See I can link this crap from a literal propaganda outlet doctrinally commited to one conclusion only.”

Ok, great. No idea if your assertion of “most” there is correct because I didn’t check other websites. Just glad you admitted you were wrong.

So it is the AiG position that Giraffes descended from some phenotype absent the historical record. But what we see from deep history is this:

A short “giraffe” (I don’t see a modern phenotype in that illustration) 1000 years after the flood is a problem, why?

Not according to the major professional creationism advocates, all of whom suggest the animals were placed into some form of suspended animation (in order to avoid having to deal with food/water requirements, predation and having offspring).

Ok, great. No idea if your assertion of “most” there is correct because I didn’t check other websites.

Two of every kind of land animal entered the ark, including those animals (e.g., dinosaurs) that have become extinct in the millennia following the Flood. The animals were all young animals, since they would have to spend the year in the ark without reproducing and then emerge to repopulate the earth after the Flood. The animals entering the ark were those individuals possessing genes for the remarkable physiologic abilities of migration and hibernation. These were not needed in the equable climates of the primeval world, but would be vital for survival in the post-Flood world. After being installed in their respective “rooms” in the ark, and after a good meal, most of them probably spent most of the Flood year in a state of hibernation.

We similarly see creationists claim that God ‘could have used or modified existing hibernation instincts’. But here, too, we cannot escape from the raw fact that to put all those animals to ‘sleep’ for the year of the Flood would have involved a substantial dose of supernaturalism. Many mammals do hibernate each year, often for about six months at a time. (Even hibernating for half the journey would help, of course.) But many animals do not hibernate at all. So why should those on the Ark hibernate, and why at that particular time? Here, too, it is almost redundant to talk of ‘modifying existing instincts’, since it might have been just as much trouble for God to put the animals directly into a torpid state.

It is quite possible that God could have induced dormancy during the Flood, if it were needed for the animals to survive, even among non hibernating animals.

And here’s the article you cited from Answers in Genesis:

It is, of course, also possible that God put the animals into a sleep for most of the time that they were on the ark.

So they do suggest the animals might have been placed into some form of suspected animation.

I’m changing “most” back to “all” again, and instead changing “were” to “might have been”:

All the major creationism advocates suggest that the animals might have been placed into some form of suspended animation.

Just glad you admitted you were wrong.

Here’s the problem I see.

The entire story of Noah’s Ark is obviously a myth. It is utter foolishness to think it really happened.

By engaging in a serious discussion with those who exhibit such foolishness is more likely to reinforce their perception that there is a serious debate to be had on the subject than it is to convince them of the truth.

I hadn’t intended this to be a serious discussion, hence the focus on hoisting dung. Is it coming across that way?

@thoughtful seems to think so. At the very least, it seems to me she honestly believes the story to be true and that she is presenting reasons to justify her belief. OTOH, that may just put her in the role of straight man, even if unintentionally.

Why is it likely at all? All the picture says to me is that a young, wild giraffe was captured as a tribute.

Giraffes resist domestication or being tamed. As Jared Diamond argued in Guns, Germs, and Steel, the list of successfully domesticated large animals is short, but the impact on civilization of those that were was transformational. One does not have to speculate as to which animals were domesticated; the textual and archaeological evidence is glaring - the imprint sometimes extending to our own genes. As far as I know, only fully domesticated animals have resulted in breeds.

Grazing under the continuous gaze of red tooth and claw have rendered Savanna herbivores skittish and even lethally defensive, which is why zebra’s cannot be trained as horses.

If the suggestion of domestication is to provide an avenue whereby some created kind can disembark after the flood and experience accelerated evolution via breeding, in the absence of any positive support it appears as another ad hoc rescue device typical of YEC flip flops surrounding the giraffe.

A short “giraffe” (I don’t see a modern phenotype in that illustration) 1000 years after the flood is a problem, why?

Believe your eyes. The illustrated giraffe is absolutely the size and proportions of a young animal. Go to a zoo celebrating the birth of a giraffe and what is in the illustration is what you will see. The ancient artist did a better job than what I would draw and stick to the fridge with a magnet. So the phenotype is indeed that of a modern giraffe, not something from the planet Pandora such is displayed at Ark Encounter.

In any event, there are other depictions dating back to pre-dynastic Egypt and sub Sahara Africa showing the elongated neck, even to a rather exaggerated extent. AiG is engaged in a fictitious world building that the earth is not just younger than demonstrated by science, but younger than recorded in archaeology and history. Giraffes are giraffes today essentially as they were 20,000 years ago.

All this flies in the face of the extensive creationist literature which denies that the long neck of the giraffe can evolve at all. One even wrote a whole book dedicated exclusively to the impossibility of giraffe evolution.

Do you have ANY evidence for an extended period of Giraffe husbandry by humans? Any written texts from the last 3000 years, any artwork, any re-told tales or anything that shows humans were keeping short-necked giraffes and were artificially selecting them for neck lengh? And why would they do that anyway? You’re literally just making up a story and providing it as if that is a rebuttal of any worth. Will you answer my questions by just making up more?

You’re literally just making up a story and providing it as if that is a rebuttal of any worth.

That’s a pattern I noticed with Valerie on the Nathaniel Jeanson threads.

Will you answer my questions by just making up more?

Based on my prior experience with here, most probably she will.