‘I was a blue-eyed, chubby-cheeked five-year-old when I joined my family on the picket line for the first time.'

This story of a woman who left the Westboro Baptist Church is important.

Someone would arrive at my profile with the usual rage and scorn, I would respond with a custom mix of Bible verses, pop culture references and smiley faces. ‘They would be understandably confused and caught off guard, but then a conversation would ensue. And it was civil — full of genuine curiosity on both sides. How had the other come to such outrageous conclusions about the world?’

One day while Megan was holding a ‘God hates Jews’ sign during a protest in New Orleans, a man named David, who ran a blog called ‘Jewlicious’, approached her after several months of heated but friendly arguments online. Megan said: ‘He brought me a Middle Eastern dessert from Jerusalem, where he lives, and I brought him kosher chocolate.’ The interaction with the outside world blurred the lines of good and evil enforced by the church during Megan’s childhood and she slowly became aware of hypocrisy within Westboro Baptist Church’s preaching.

Megan said: ‘How could we claim to love our neighbor while at the same time praying for God to destroy them?

I highly recommend her TED talk too.

I grew up in the Westboro Baptist Church. Here's why I left

What's it like to grow up within a group of people who exult in demonizing ... everyone else? Megan Phelps-Roper shares details of life inside America's most controversial church and describes how conversations on Twitter were key to her decision to...

When people are raised in close minded cults like this, they need help. The best way to help is by building trust. Trust only grows in conversation. Without conversation, there is no way to be trusted, and it doesn’t matter if we are right. Her story is an example of what can happen when we take the time to listen to the people with whom we most disagree.

That is one of the real tragedies of the fractured society in which we live. When the divides are wide, and the walls are high, conversation is difficult. It is hard to build trust. That perpetuates the madness. We need to do better this next generation. We need to find a better way.

‘The truth is that the care shown to me by these strangers on the internet was itself a contradiction. It was growing evidence that people on the other side were not the demons I’d been led to believe.’

That is what we have an opportunity to do here too. Let us show care to others here, especially when they are new. It matters.

Let us show care to others here, especially when they are new. It matters.

Indeed it does. And wherever we may post on the Internet, it is important that we make clear that though we may passionately disdain some ideas, we don’t necessarily disdain the people who hold such ideas. That includes those raised within the Westboro Baptist Church who have so much to sort out as they begin to discover the realities of the outside world—as well as the meaning of the love which Jesus preached.

Yes, sometimes the conflict of ideas involves matters of vital ethical importance and justice, so that very strong and unambiguous stands are essential. Nevertheless, Jesus modeled for us an ability to “hate the sin but love the sinner”. He even befriended a much-hated tax-collector who had grown rich from basically extorting people. Jesus even dined with that man, despite the vehement disapproval of his critics.

Of course, many of our disagreements online are not based on such obvious evils. Yet, we can maintain that same distinction between the person and the idea and show the love of Jesus to that person. I can see why Dr. Swamidas wants to emphasize this topic.

This topic also brings to mind many great experiences I’ve had getting to know atheists, both among my faculty colleagues and in online forums. It concerns me that so many Christians assume that every atheist is an angry, fire-breathing anti-theist and they want to treat them accordingly . Even at my own churches over the years, I’ve had to respond to far too many members who make all too casual condemnations of atheists as the utter epitome of evil. (Some virtually made lashing out at atheists their Internet passtime. Sadly, I’ve often been condemned on Internet forums for failing to join the atheist bashing.) Just as not all Christians (or Baptists) bear any resemblance to the Westboro Baptist Church, not all atheists share much in common with the stereotypically nasty, anti-theist atheist. Obviously, most atheists are good-natured, sincere, and thinking people who are simply honest enough to say “I do not find the evidence for the existence of deity/deities all that compelling.” I can certainly respect that. And that is a good starting point for respectful dialogue. Indeed, I might hold that very same opinion if not for having a long series of personal “encounters” (for lack of a better term) with the truths of Jesus Christ.

The life of love taught by Jesus Christ invites respectful dialogue. It provides a good foundation for a forum like Peaceful Science.

I am surprised you never heard of WestBoro Baptist. They are the worse ever. FFRF have been fighting them for years. We helped Megan tell her story to the world. 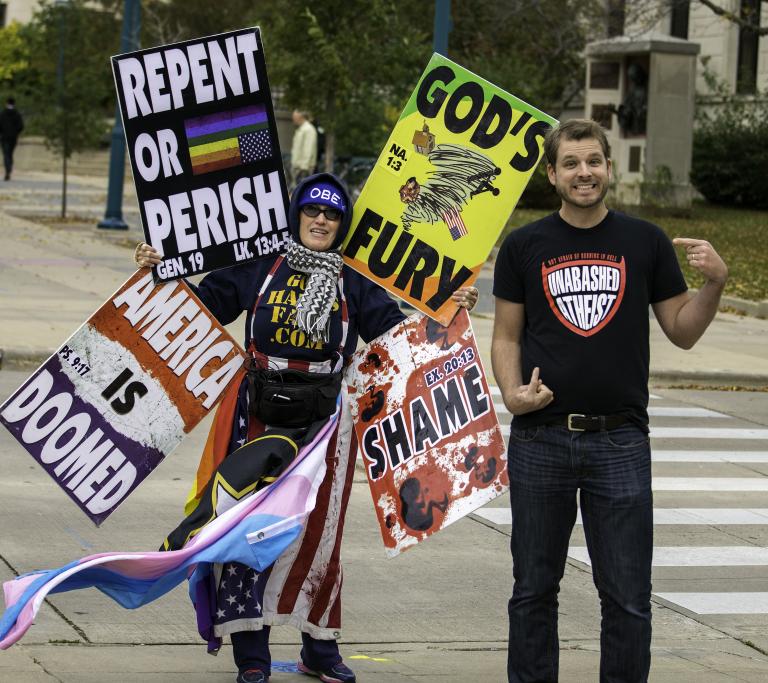 The T-shirt that rattled the Westboro Baptist Church

I am surprised you never heard of WestBoro Baptist.

Of course I’ve heard of them. The main reason they came up in the first place is clarifying they have little to do with Baptists.

5 posts were split to a new topic: A Fool Says in His Heart

‘The truth is that the care shown to me by these strangers on the internet was itself a contradiction. It was growing evidence that people on the other side were not the demons I’d been led to believe.’

That is what we have an opportunity to do here too. Let us show care to others here, especially when they are new. It matters.

For those new to the forum, I want to draw your attention to this thread. We have very high standards on discourse here. Certainly express your point of view, but work hard to understand others too. Understand and be understood. Be kind.

No one is being called out. We are glad you are here. I just want you to know our ethos.

Thanks @swamidass, I wouldn’t have it any other way.

@swamidass
Totally with you on this.